When you wade in the sea and an eel bites your knee, that’s a moray

Words to live by. 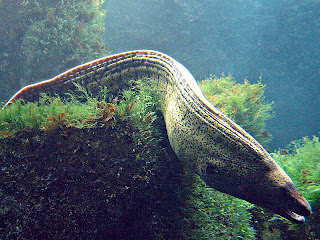 (Photo used under the terms of the GNU Free Documentation License, Version 1.2)

Email ThisBlogThis!Share to TwitterShare to FacebookShare to Pinterest
Labels: moray

This is our 18-year-old grandson, Matthew, in rehearsal. 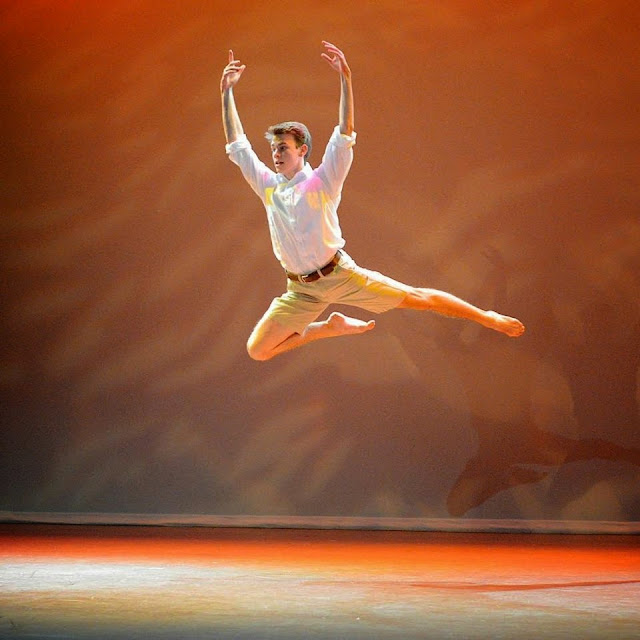 He floats through the air with the greatest of ease, this daring young man sans a flying trapeze.

Peter Pan, eat your heart out.

Email ThisBlogThis!Share to TwitterShare to FacebookShare to Pinterest
Labels: Matthew in mid-air

What a difference a day makes... 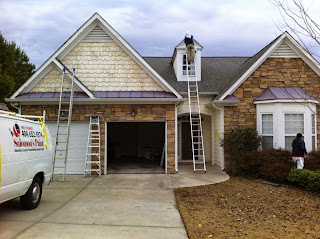 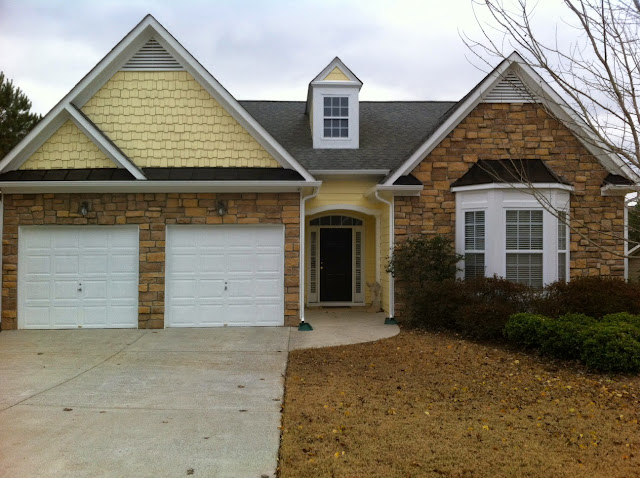 Entrance area before (taken in December 2013 complete with dead leaves): 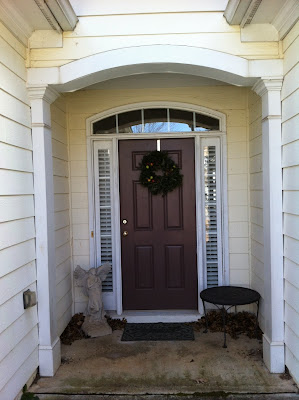 Entrance area after (with leaves already beginning to replenish): 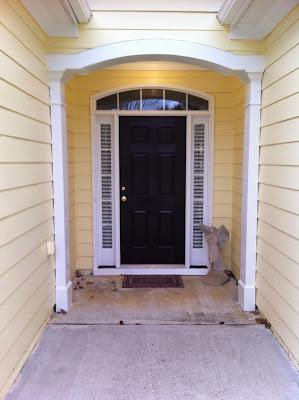 Only the front of our house has stacked stone. The other three sides are the new creamy yellow with white trim. The original color, by Duron, was a light beige called Beach Basket. The new color, also by Duron, is called Light Honey.

Email ThisBlogThis!Share to TwitterShare to FacebookShare to Pinterest
Labels: my house 11-25-2014

Today our house is getting its first paint job since 2003. 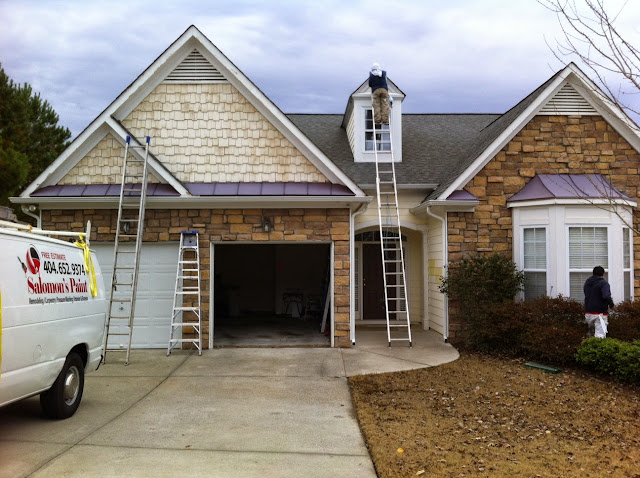 Email ThisBlogThis!Share to TwitterShare to FacebookShare to Pinterest
Labels: my house 11-23-2014

Another letter from Howard Griffin

I shared with you recently a letter I received in 1958 from my Texas neighbor, author John Howard Griffin. Howard had become blind because of a plane crash while in the Army Air Corps in the Pacific in 1946. His parents, Jack and Lena Griffin, moved from the city of Dallas out into the country, and it happened that they bought a farm on our lane. We were four families in all -- the Bragues, the Hugginses, the Griffins, and the Brocketts. Howard Griffin met a local girl, Elizabeth Ann Holland, and converted from Presbyterian to Roman Catholic in order to marry her. They had four children together before he suddenly regained his sight in 1957. In what had formerly been a barn at his parents’ place, Howard kept a writing studio equipped with a typewriter and a reel-to-reel tape recorder. Sometimes he would drop by to chat while out riding his horse or walking with his beautiful collie dog.

Today I want to show you a letter Howard wrote to my mother in 1956 shortly before he regained his sight. I found it among her things after she died and have kept it all these years:

We have just been visiting with Mrs. Brockett who told us the news of your forthcoming operation. Sitting out here in my studio tonight, working until very late, one thought keeps tormenting me. It is this:
I wonder if you have any idea what an inspiration you are to your neighbors, and how truly devoted to you we are? - even though people sometimes find great difficulty showing these things, or expressing them.

You have many silent rooters for your health and well being. Not just those in my immediate family - no; I am sure I speak for everyone whose llife in any way touches yours, even casually. Many a prayer goes up for you that you perhaps do not suspect. The good that you do all of us by your example is more far-reaching than you imagine. I hear it spoken of frequently by the townspeople.

I do not mean this to be a somber letter, nor do I wish to give you the embarrassment of an answer - so just tuck it away in your memory as a bit of information that needed saying. We have boundless admiration for your gallantry and courage - and sometimes it doesn’t hurt to be told those things which all of us feel but which few of us take the trouble to express.

I have sent out word to the Carmelite nuns - those wonderful women who spend their lives in prayer for others - to remember you especially at this time, as I did when you were hospitalized before. And I thought you might like to know that in convents all over this country and Europe your name is being spoken by people who ask the blessings of health and happiness for you, Bobby and Ted.

Minimal, thanks, and you?

so much depends
upon

beside the white
chickens.


This Is Just To Say

I have eaten
the plums
that were in
the icebox

and which
you were probably
saving
for breakfast

Forgive me
they were delicious
so sweet
and so cold


Besides these two poems I also want to share with you an email I received about a woman whose computer password was “MickeyMinniePlutoHueyLouieDeweyDonaldGoofySacramento” and when asked why she chose that particular password she replied that the instructions said it must have eight characters and at least one capital. I personally think Indianapolis or Tallahassee is funnier than Sacramento but that may just be me. Also, for all readers outside the U.S., Sacramento is the capital of California, Indianapolis is the capital of Indiana, and Tallahassee is the capital of Florida, but if you pass this story along I suggest that you say Helsinki.

Why, yes, I am feeling much better. Why do you ask?

Email ThisBlogThis!Share to TwitterShare to FacebookShare to Pinterest
Labels: The Red Wheelbarrow, This is Just to Say, William Carlos Williams 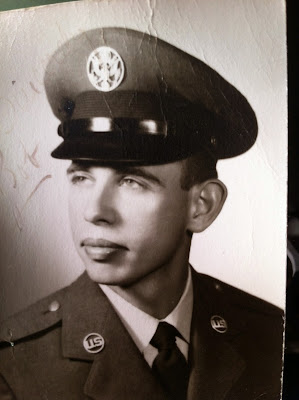 Quiz post-mortem, or If you want me, just whistle

Out of my vast potential readership of 7.2 billion people on planet earth and a few on Uranus, a grand total of two people entered yesterday’s quiz. Thank you, Mary Z in Tennessee and Reamus in Southern California. Well, at least it wasn’t a complete bust.

To review, the question was to identify who said the following, and when, and why:

1. “My fellow Americans, our long national nightmare is over. Our Constitution works; our great Republic is a government of laws and not of men. Here the people rule.” The correct answer is Gerald R. Ford on taking the oath of office as President of August 9, 1974, after Richard Nixon resigned. 100% of male respondents answered correctly. 100% of female respondents didn’t answer at all.

o 2. “Poor George, he can’t help it. He was born with a silver foot in his mouth.” The correct answer is Ann Richards, then treasurer of the state of Texas and keynote speaker at the 1988 Democratic National Convention (she would not become Governor of Texas until 1991) , referring to then Vice-President George H. W. Bush. Both respondents identified Ann Richards as the speaker but neither one got the occasion, although Mary thought it was in reference to George W. Bush (the son) .

3. “We’re going to take from the haves and give it to the have nots who need it so much.” Mary didn’t answer. Reamus said Dan Quayle (George H. W. Bush’s Vice-President) . The correct answer is President Lyndon B. Johnson speaking in 1964 of his Great Society programs.

4. “One, if by land, and two, if by sea; and I on the opposite shore will be, ready to ride and spread the alarm through every Middlesex village and farm.” Both respondents said Paul Revere, which may or may not be correct -- we don’t know exactly what he said. The answer I had in mind was poet Henry Wadsworth Longfellow, who wrote the lines in “Paul Revere’s Ride (The Landlord’s Tale)” in 1860, 85 years after the actual 1775 ride.

6. “I only regret that I have but one life to give for my country.” These words were correctly identified by 100% of our entrants as the final utterance of American Nathan Hale before he was hanged by the British during the American Revolution.

8. “We have nothing to fear but fear itself.” Both respondents correctly identified the speaker as FDR and the occasion as his first inaugural address in 1933.

9. “Nobody’s perfect.” Mary left no answer. Reamus said he and many others had said it. The answer I was looking for was actor Joe E. Brown to actor Jack Lemmon at the end of the movie Some Like It Hot.

Mary, Reamus, and I have had a wonderful time wasting time with this quiz. I only wish that more of you had chosen to do so. I’ll think about that tomorrow. After all, as Humphrey Bogart once said to Lauren Bacall, tomorrow is another day.

Email ThisBlogThis!Share to TwitterShare to FacebookShare to Pinterest
Labels: answers to post-American-election quiz

Who said that? (A post-American-election quiz)

...And when? And why? (No fair peeking or Googling. You will receive extra points for creativity. Some questions may have two answers; pick the most accurate one.)

1. “My fellow Americans, our long national nightmare is over. Our Constitution works; our great Republic is a government of laws and not of men. Here the people rule.”

2. “Poor George, he can’t help it. He was born with a silver foot in his mouth.”

3. “We’re going to take from the haves and give it to the have nots who need it so much.”

4. “One, if by land, and two, if by sea; and I on the opposite shore will be, ready to ride and spread the alarm through every Middlesex village and farm.”

6. “I only regret that I have but one life to give for my country.”

7. “Damn the torpedoes! Full speed ahead!”

8. “We have nothing to fear but fear itself.”


[Editor's note. Any similarity to anything I have ever said or written in the seven-year history of this blog is purely coincidental. --RWP]