To commemorate this auspicious occasion,

...the tenth anniversary of the one and only rhymeswithplague blog, I wanted to show you the last rose of summer. which surely would remind many of you young whipper-snappers of moi.

However, I cannot show you the last rose of summer because (a) I do not have any roses and (b) my neighbors who do have roses of the popular "knockout" variety have many, many roses currently and I have no clue at this point which of them will turn out to be the last one of the year.

Therefore, I will show you what I do have, which are our encore azaleas (so named because they bloom both spring and fall) and our beautiful sasanqua camellia which blooms every year in September and October. We have had this particular bush for 13 years now. I have no idea how old it was when Phoebe E., our landscaper, planted it near our front door, but like this blog, it endures. Camellias seem to be both hardy and fragile (I think of Greta Garbo in her most famous role) but the individual blooms do not last long. The petals fall to the ground daily and are supplanted by more of their kind. This seems to me to be symbolic of blogs and bloggers in general, and I for one am happy to have continued as long as I have.

I may be gone in a moment's notice or stay around for quite a spell -- no one knows for sure -- but while I remain I intend to bloom my guts out for your reading enjoyment. 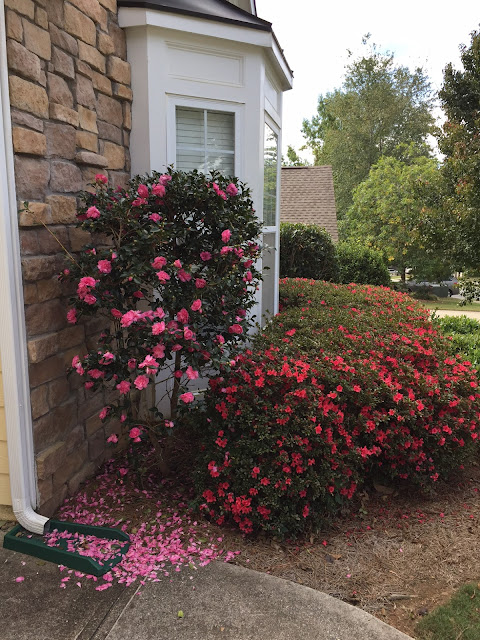 The jury is still out on whether this blog is written by a budding genius or a blooming idiot.

The world is not ending today after all, but the world as we know it is ending

So says a man named David Meade who is about as kooky as they come. Maybe kooky is too harsh a word. Loony. That's much better.

He has lots and lots of details about the planet Jupiter and the constellation Virgo and a heretofore unnoticed planet called either Planet X or Nibiru (take your pick) that has supposedly entered the solar system and will crash into the earth shortly. You can read all about this stuff somewhere else if you care to, because I will not dignify the ruse scam nonsense matter further.

Somehow the return of Christ and the end of the world are intertwined, or they're not, depending on where you wish to place your money.

It's all about the money.

Some apocalyptic titles have to do with nuclear catastrophe instead of the return of Christ, such as Alas, Babylon which I read about forty years ago, and The Postman, which was made into a movie starring Kevin Costner, and we mustn't leave out The Road by Cormac McCarthy. Nuclear catastrophe seems much more likely in the overall scheme of things than the Planet Nibiru crashing into earth, don't you think?

This has been another semi-fascinating post to make you aware of what's going on around you that you aren't even aware of.

This post could probably benefit from a beginning, a middle, and an ending, but it is what it is.

For those of you who remember him, Putz is beginning to seem more lucid all the time.

Editor's note. An update for readers of yesterday's post. On 13 February 2017, Kim Jong-nam was assassinated. He died after being attacked by two women with VX nerve agent at Kuala Lumpur International Airport in Malaysia while traveling from Macau under a pseudonym. The death is under investigation but it is speculated that it was carried out by the North Korean government. --RWP

Email ThisBlogThis!Share to TwitterShare to FacebookShare to Pinterest
Labels: Alas Babylon, end of the world, planet Nibiru, The Postman

Today may be the equinox, but I'm definitely unbalanced

As we say in the New World, in life as in the dictionary, perspicacity precedes perspicuity.

I'm pulling your leg. We don't really say that. I do, but we don't.

In England, the name given most often to baby boys in 2017 is Muhammed. Apparently there is a trend going on there as well.

*One fervently hopes our own Dear Leader in Washington D.C. will do the same.

This post is not supposed to make any sense.

So far I am succeeding.

Happy equinox to you all.

All Irma, all the time 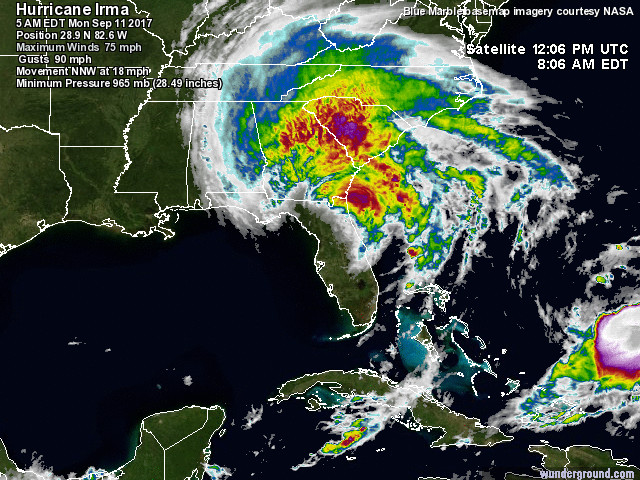 I'm not saying it wasn't bad in Florida, because it was, but it seems to me that just as the History Channel seemed for a while a few years ago to be the "All Hitler, all the time" channel, the news channels for the last couple of days have been "All Irma, all the time." That enhanced satellite image up there of where Irma was at 8:06 AM EDT (12:06 PM GMT) today looks really, really bad, but at this moment north Georgia is receiving only a very light rain, the long, slow kind that the grass loves.

Irma is no longer classified as a Category 4, 3, 2, or even 1 hurricane. She is a tropical storm now. Things may change by this afternoon, and probably will, but that is no reason for everybody in Georgia and Alabama and South Carolina to panic. Well, maybe South Carolina. But the 24/7 coverage the last few days of Irma's slow progress seemed to me to be more of an exercise by government officials in learning how well the populace will respond to instructions from on high.

As usual, this has been one man's opinion.

Other things were happening in the world as well, which one would never have known from watching the news channels. Twenty-four hours a day of relentless coverage of a single story, important as it may be, is not my idea of a news channel. Where was the Mexico earthquake? Where was Kim Jong Un? Where was the run-up to the sixteenth anniversary of 9/11/2001? Where was Prince George's first day of school? Where was the Georgia Tech versus Jacksonville State University football game?

And another thing: Since government in this country is increasingly a top-down effort (rather than a bottom-up effort as God and the United States Constitution intended), the Federal Government apparently sent a man to oversee fleets of ambulances to (where else?) the capital city of Florida, Tallahassee, to help evacuate the elderly and residents of hospitals and assisted-living centers in the Miami area. The announcement was accompanied by self-congratulatory pats on their own backs and speeches from government officials all around. Friends, Tallahassee is 480 miles from Miami. This is akin to having an emergency weather event in Sheffield, Yorkshire, and sending fleets of ambulances to the Isle of Lewis.

Rant over. I think. Everyone is glad, of course, that the damage done by hurricane Irma turned out to be much lower than anticipated.

In our family, however, the most important event of the weekend was that our Alabama grandson in the JSU band received a visit from his Georgia aunt and uncle: 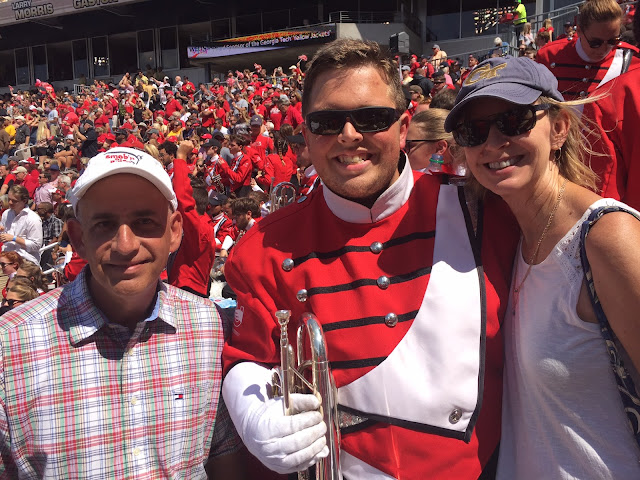 You probably can't spot him on the field, but you can definitely enjoy the sound of the band (4:32).

Unfortunately for JSU fans, the final score of the game was Georgia Tech 37, Jacksonville State 10.

Time may pass, but some things do not change

Here is a 2017 demonstration of the above by some people I know: 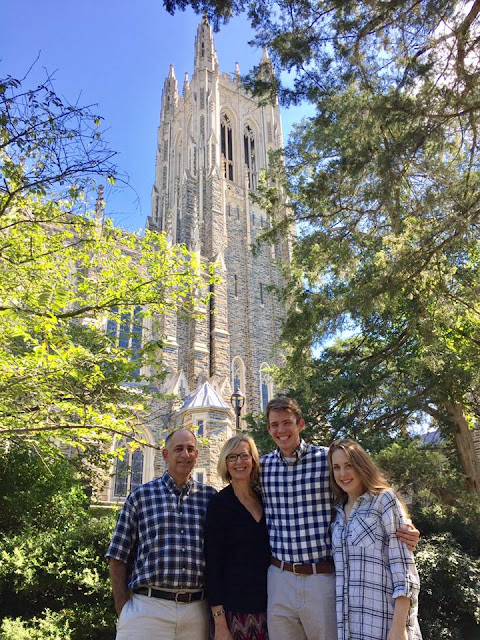 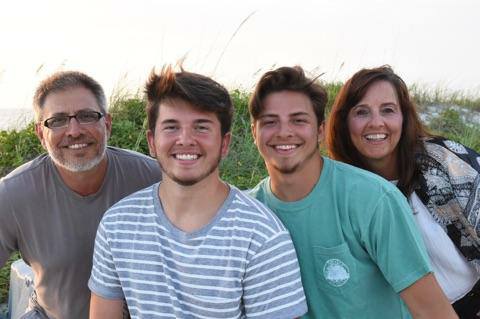 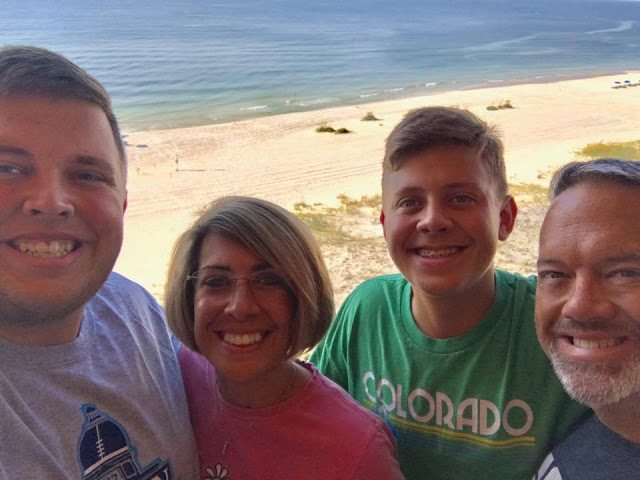 From top to bottom, these photographs were made at Duke University in Durham, North Carolina; at Indian Rocks Beach, Florida; and at Orange Beach, Alabama.

Sumer (with apologies to Robert Burns) is no longer icumen in; in fact, it is a-goin' out. Nevertheless, even though Mrs. RWP and I have stayed close to home, we are also smiling.