A. Things I have never seen and probably never will [see]:

B. Things I have seen bits and snippets of in passing and wish I hadn't:

C. Things I liked at first but grew weary of rapidly:

F. Things I wish had never come along in the first place:

G. Things I wish could have lasted forever:

Downton Abbey (this one's British, actually)
Wide, Wide World (not to be confused with Wide World of Sports)
Omnibus with Alistair Cooke on Sunday afternoons (showing my age)
The Carol Burnett Show
All In the Family
Star Trek: The Next Generation
Rose Bowl Parade from Pasadena, Callifornia

'Round and 'round he goes, and where he stops nobody knows

A few years back a woman named Mary Humphrey who raises goats in Ohio left a few comments on my other blog, the one that is a Rolls-Royce. When she happened to mention the breeds of her goats, I said they sounded like a law firm. In the following list, can you spot the breeds of goats and also the one real law firm?

Number 8 is the law firm. It's in Marietta, Georgia. A fourth Bentley joined the firm in 2014. He has not yet been made a partner, so they have resisted changing the name to Bentley, Bentley, Bentley & Bentley. For many years an actual Bentley automobile sat in front of their building as the only indication of what might be inside.

Number 2 are the goat breeds.

Number 1 are villages in England that Yorkshire Pudding mentioned in his blog recently. If you don't know who Number 3 are, well, shame on you. Number 4 are just some random names I threw together. Gobel reminded me of both George Gobel, an American comedian, and Joseph Goebbels, Adolf Hitler's buddy. Ogletree's used to be a grocery store near my home in Cobb County, Georgia. Number 5 are former managers of mine at IBM, two in Boca Raton, Florida, and two in Atlanta, Georgia. Merrill, Lynch, Pierce, Fenner & Beane (Number 6) was an early name of Merrill Lynch, an American stock trading company that eventually became the wealth management division of the Bank of America. Lamborghini etc. (Number 7) are luxury automobiles, unlike Bentley, Bentley & Bentley (Number 8), which is, as you know, a law firm. This brings us to Number 9: Christ, Marx, Wood & Wei.

In 1970, Ira Levin, who had written Rosemary's Baby earlier and would later write The Boys From Brazil and The Stepford Wives, wrote This Perfect Day, a dystopian novel of the future. It opens with a children's playground rhyme that mystified me when I first read it but by the time I finished reading the book it became perfectly understandable. Reviewer Jo Walton called This Perfect Day "unputdownable" and I agree. Forty-five years later I can still recite from memory the children's playground rhyme:

Christ, Marx, Wood and Wei
Led us to this perfect day.
Marx, Wood, Wei and Christ
All but Wei were sacrified.
Wood, Wei, Christ and Marx
Gave us lovely schools and parks.
Wei, Christ, Marx and Wood
Made us humble, made us good. 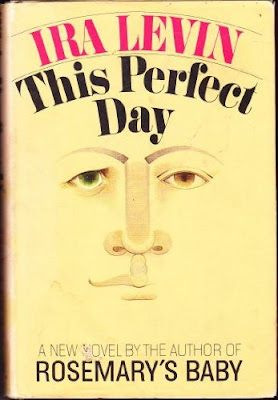 Lest you think I am prone to flitting from subject to subject, I will close now.

Better to keep one's mouth shut and be thought a fool than to open it and remove all doubt.

Talk about closing the barn door after the horse is gone.


P.S. -- This is definitely not George Gobel. 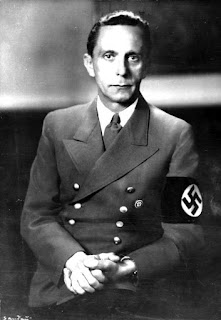 STOP THE PRESSES! Waldo has been found.

Thirty years ago, in 1986, a 30-year-old English illustrator named Martin Handford, who worked for Walker Books, was asked by his art director to create a character who could give focus to the many drawings Handford liked to create of large crowds of tiny figures. Handford invented a character named Wally and the first of his popular books was published in 1987. In other countries, for reasons not clear to me, Wally's name was changed. In the U.S. and Canada he became “Waldo” but he's “Charlie” in France, “Walter” in Germany, “Ali” in Turkey, “Efi” in Israel, and “Willy” in Norway.

One learns something new every day.

I have found Waldo in the United States. 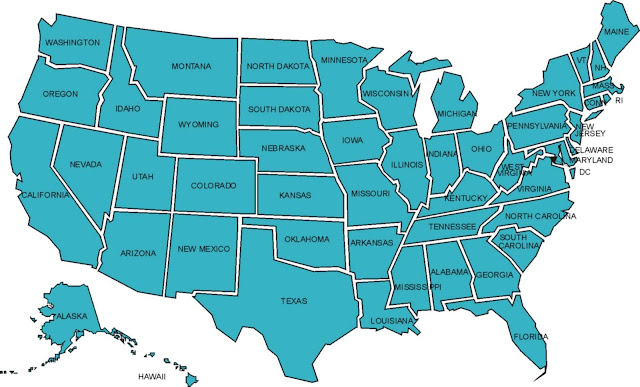 Now we're getting somewhere. Actually, Waldo is in Maine. Let's take an even closer look:

Did you see it? An entire county in southern Maine is named Waldo (shown in red in the state map on the right). Within Waldo County is the town of Waldo, population 762 (2010 census), shown in yellow in the county map on the left: 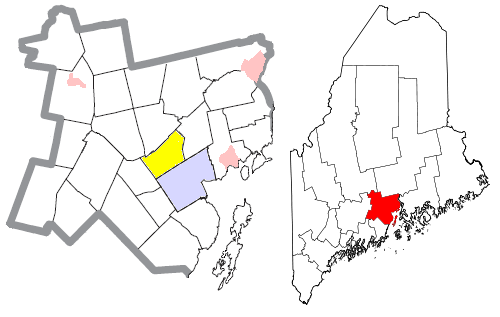 Another thing. The Waldo for whom the county and town were named doesn't look anything like Martin Handford's creation. Here is the real Waldo, Brigadier General Samuel Waldo (1696 - 1759): 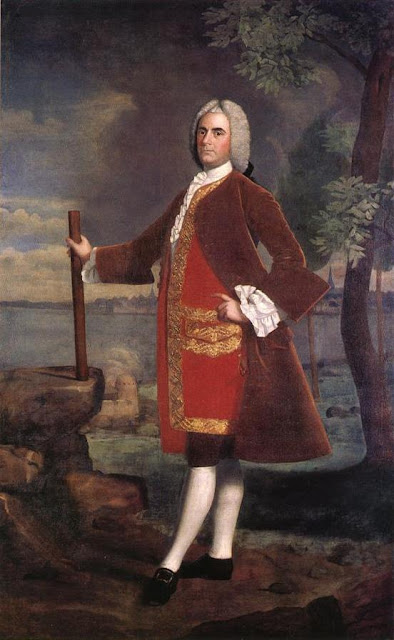 To add insult to injury, General Waldo died of apoplexy near the town of Bangor, Maine, in 1759, but in 1760 his remains were moved to Boston, Massachusetts, where they, er, remain to this day.

There is a village in Ohio named Waldo, population 338 (2010 census). According to Wikipedia, it "was laid out in 1833 by M. D. Pettibone at the intersection of a turnpike and a state road. The village was named for Waldo Pettibone, the proprietor's son. A post office called Waldo has been in operation since 1847." (Wikipedia does not say whether M.D. Pettibone was the proprietor of the turnpike or the state road.)

And there is also a Waldo, population 1,015 (2010 census) in Alachua County, Florida, named for a Dr. Benjamin Waldo, an Ocala physician. The most famous place in Waldo, Florida is a red caboose: 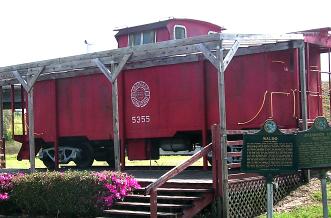 Florida's Waldo is bigger than either Maine's or Ohio's, but Maine's Waldo is older than the other two.

I'm sure Martin Handford would be proud.

Perhaps we should be asking "Where in the world is Carmen San Diego?"

I am not a narcissist, I am merely in love with the sound of my own voice

President Obama's public speeches seem more and more concerned with himself. According to The Daily Caller, President Obama referred to himself 45 times over the course of the speech he delivered Tuesday at the memorial service for the five police officers killed in Dallas last week. An article in The Washington Examiner reveals that in a gun-control speech in January Obama referred to himself 76 times over his 33-minute remarks. Following an October mass shooting in Roseburg, Oregon, Obama mentioned himself 28 times in a 12-minute speech. During a visit to New Delhi last January, he referenced himself 118 times in 33 minutes.

[Editor's note. I should like to point out that the elegant variation a pedant or English teacher might detect in the previous paragraph (referred, mentioned, referenced) were part of the Washington Examiner article and are not of my own making. --RWP]

President Obama is not alone, of course, in being the center of his own universe. Everyone is, to some extent. For example, in an emotional final speech today, outgoing U.K. Prime Minister David Cameron said, “I will miss the roar of the crowd. I will miss the barbs of the opposition...I was the future once."

And given the brouhaha in the U.S. recently concerning Hillary Clinton's destruction of classified emails and the FBI's decision not to recommend indicting her, another former player on the world's stage now wishes to revise and extend his remarks: 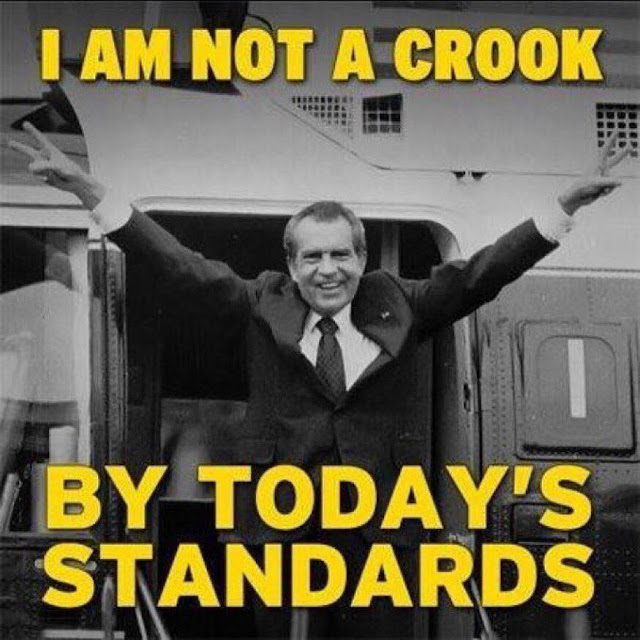 While Matthew was spending time in Kimana in southern Kenya, another of our grandsons, Noah, was spending a month several hundred miles away in western Kenya, at a school and clinic in Ngoswani: 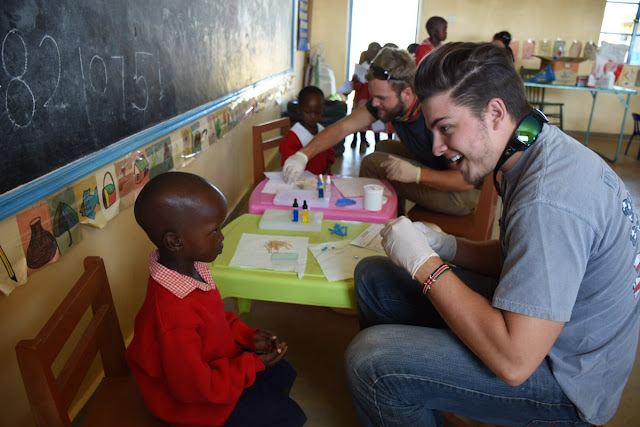 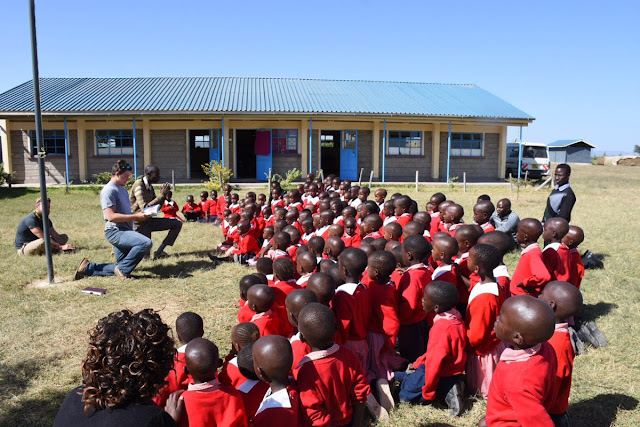 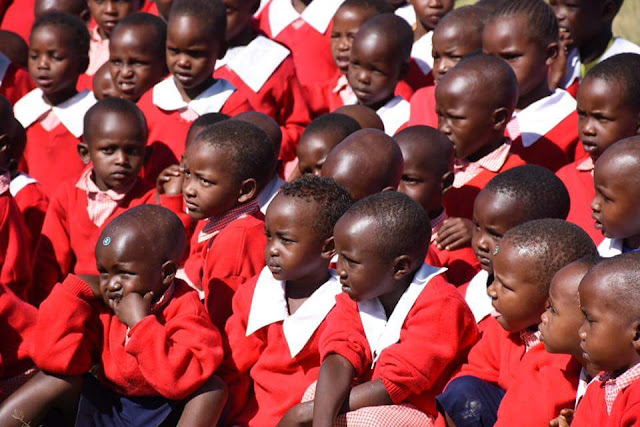 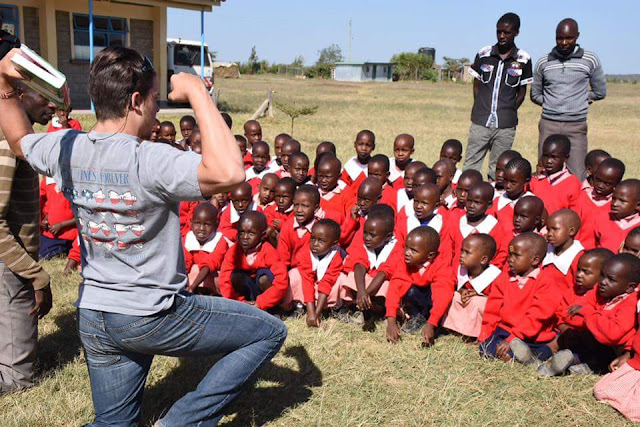 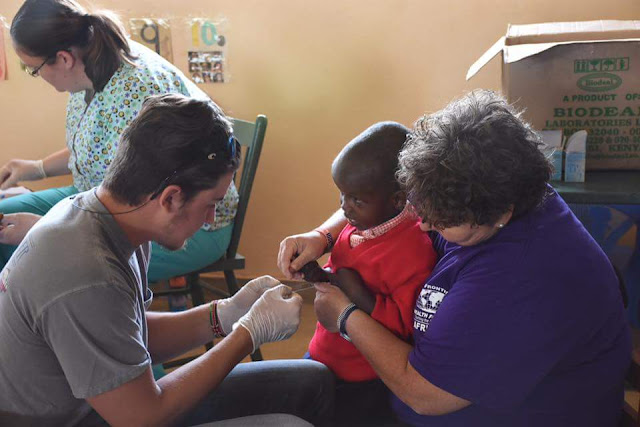 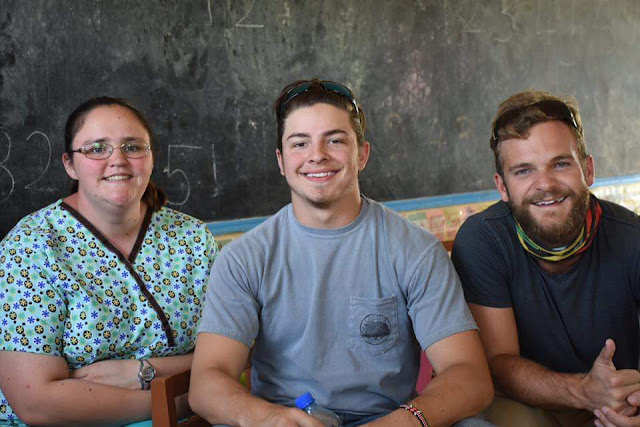 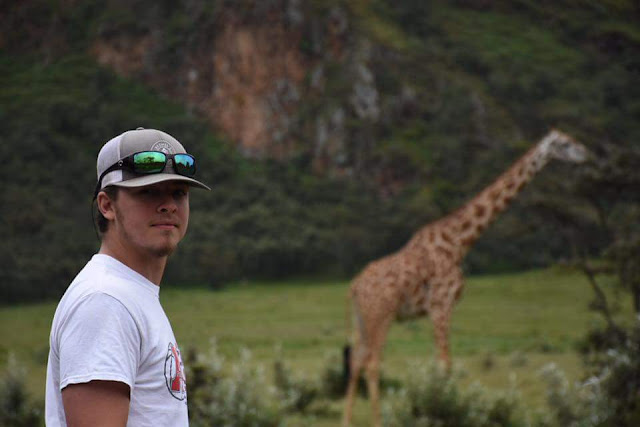 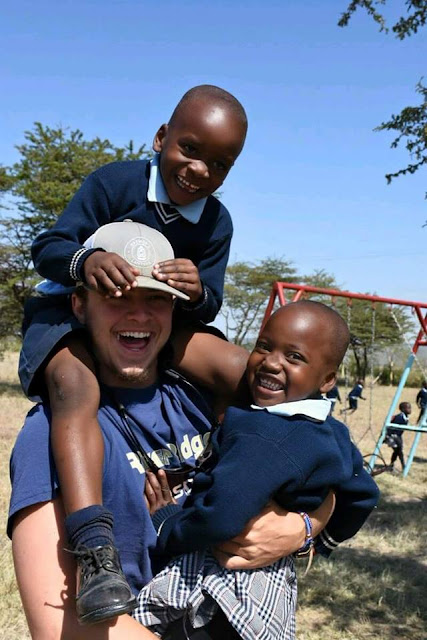 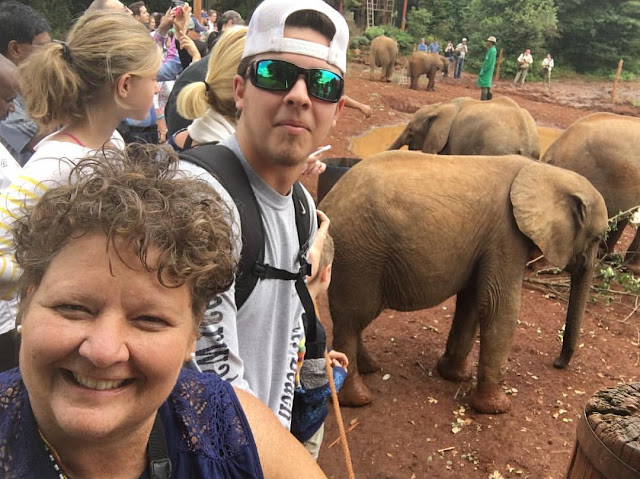 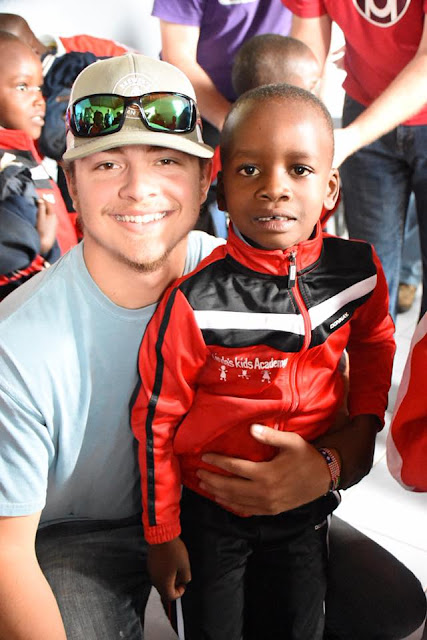 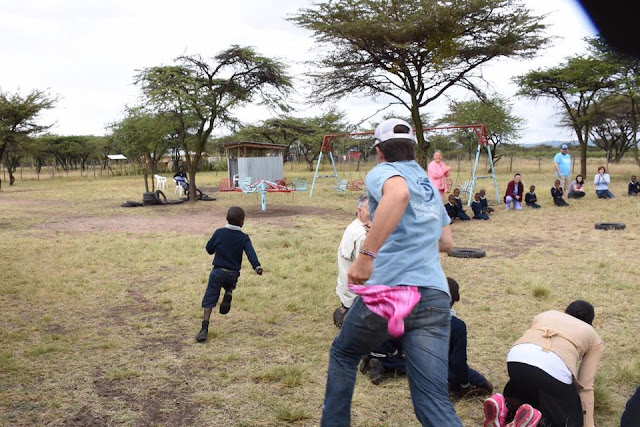 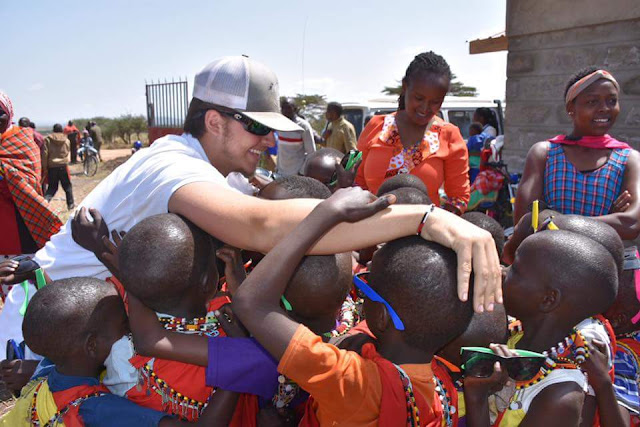 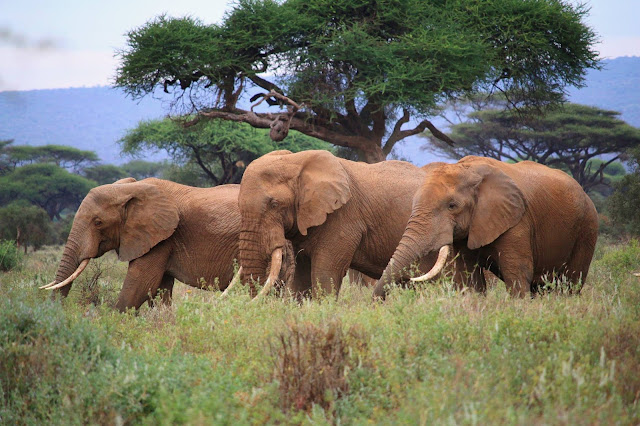 I did not take this photograph. The team my grandson Matthew is with this summer did. The team -- three friends from university -- are spending all of June, July, and part of August in Kenya. The elephants were just strolling along near a road in Amboseli National Park. 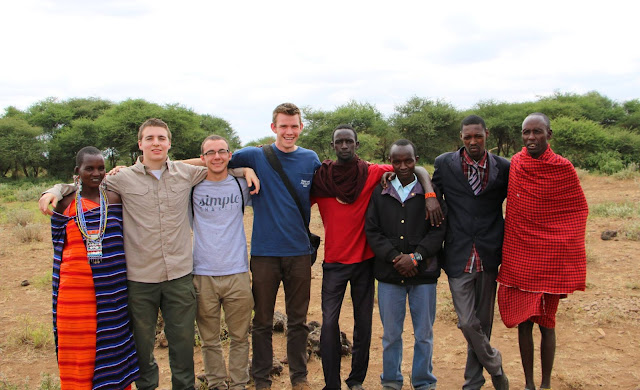 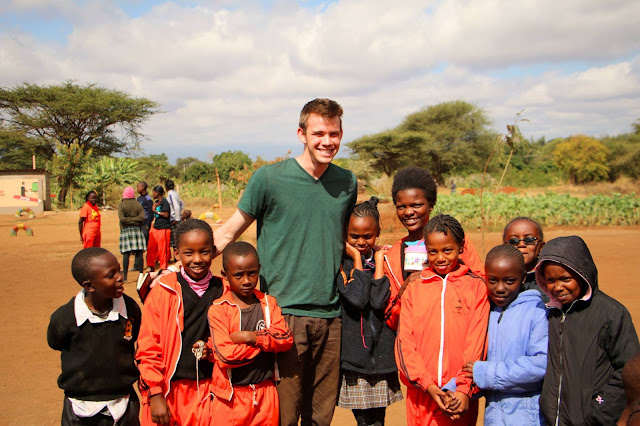 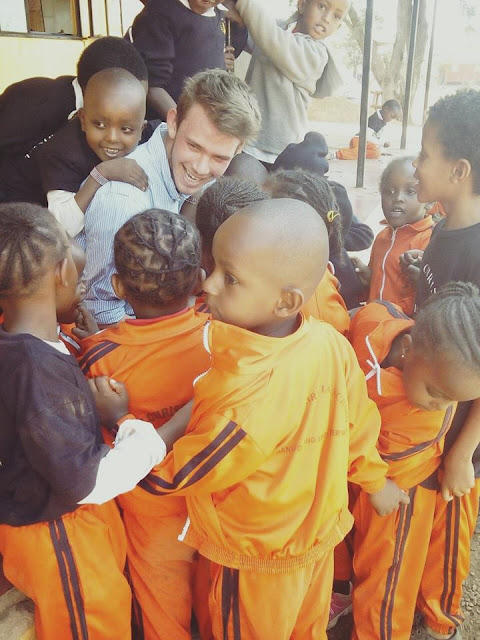 The team -- Brian, Sage, and Matthew -- are dividing their time between teaching schoolchildren at Lenkai Christian School in Kimana and distributing water filters to people that don't have clean water. They are there under the sponsorship of Duke Engage and Just One Africa.

Elephants are very big and very intelligent, and their eyesight is usually very poor. But there's something else you should know about elephants.