It's George Washington's birthday. Time to take down the Nativity scene.

Yes, you read that correctly.

Christmas was over. New Year's Day came and went. Epiphany came and went. Ash Wednesday came and went, to say nothing of Mardi Gras. The Super Bowl came and went. The first two Sundays in Lent came and went. But in the fullness of time Washington's Birthday arrived, and today -- February 22nd, 2016 -- I finally took down our Nativity scene from the credenza in the entrance hall and packed it away in the garage for another year nine-and-a-half months.

Hello, my name is Bob and I am a procrastinator. I'm nearly 75 years old and it's time I admitted it.

Confession is good for the soul.

It could have been worse. One year it was mid-March and St. Patrick's Day was looming before I put the Nativity scene away.

In my defense (British, defence), I have had lots of other activities contending for my time, such as:

A. Watching my grandson play baseball. Here he is in the batter's box against Wabash College. [Editor's note. For readers who don't follow baseball, in this particular "at bat" (AB) the "bases were loaded" and my grandson "reached first base" when he was "walked" by the pitcher, and although he didn't get "a hit" (H), he was credited with "a run batted in" (RBI) because his "base on balls" (BB) caused the player on third base to "reach home" and be credited with "a run" (R). Statistics are everything in baseball. --RWP]: 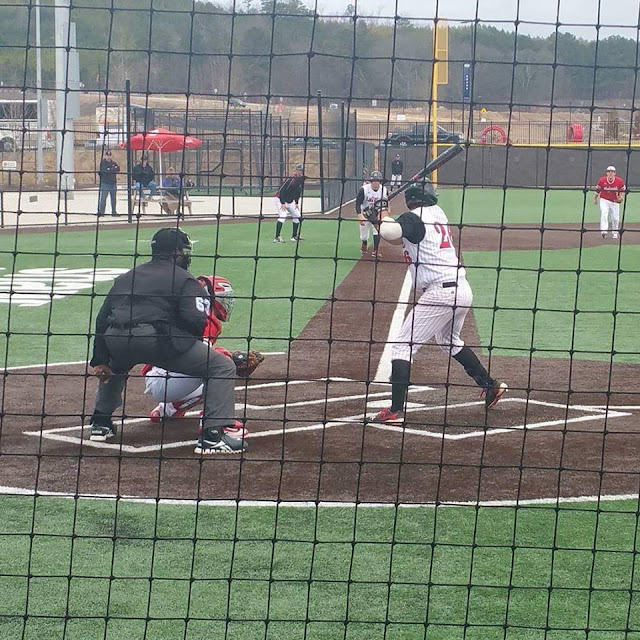 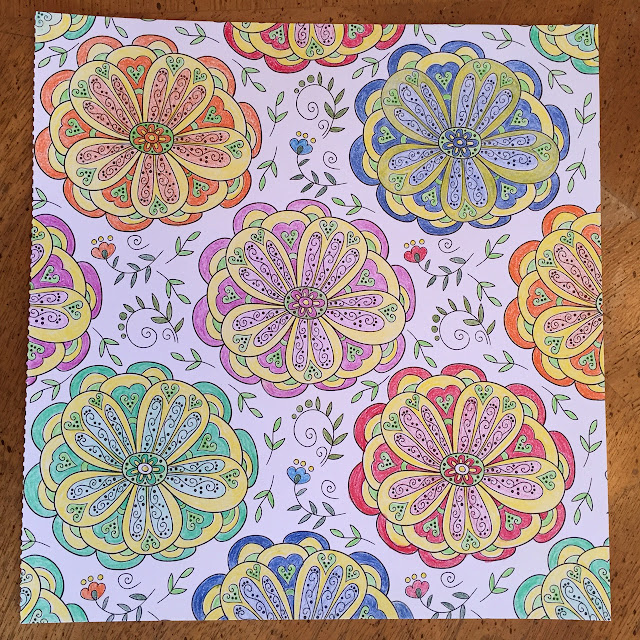 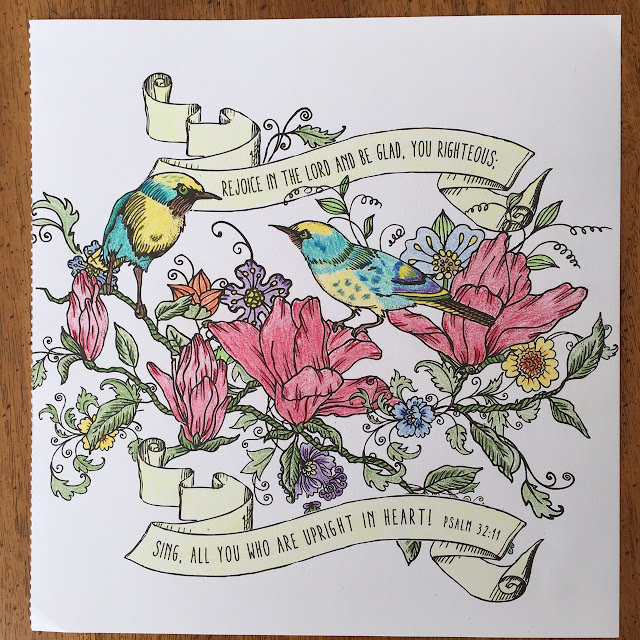 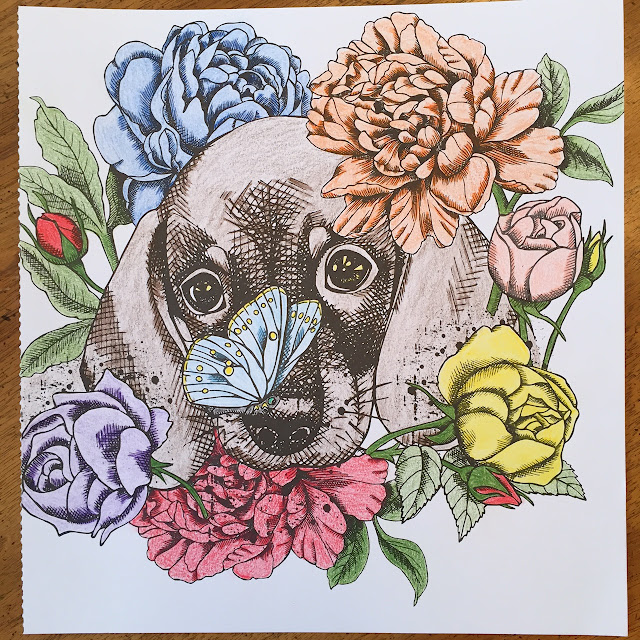 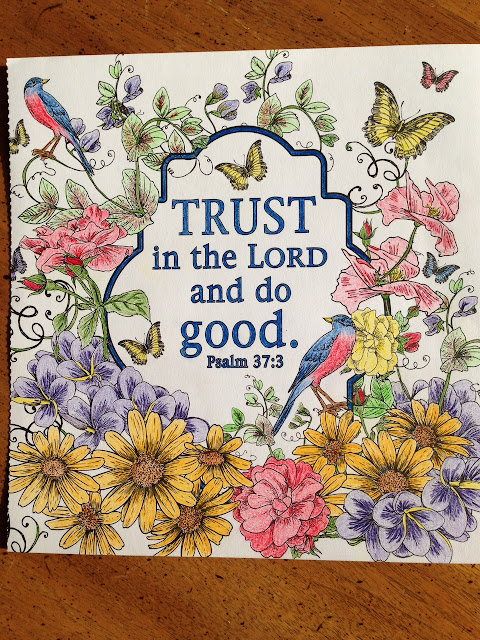 C. Pondering life's really important questions, like "Where are the snows of yesteryear?": 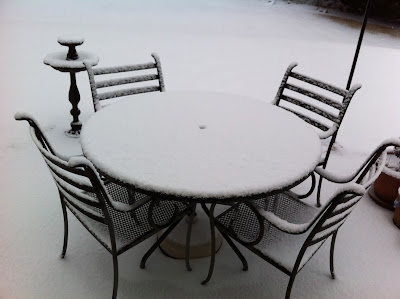 I knew you would understand.

Here's one last look at you know what: 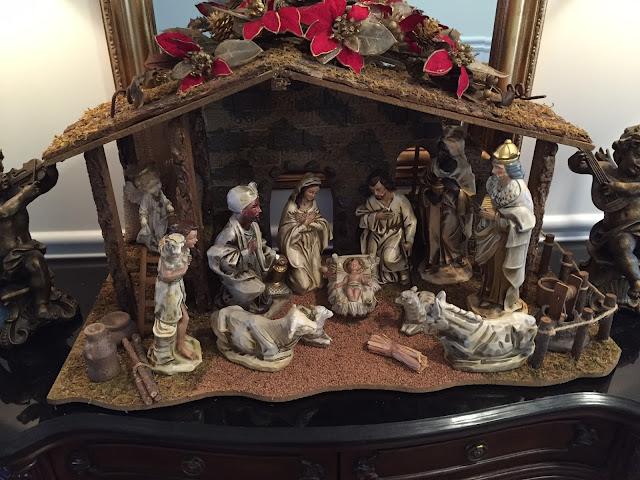 Since Saturday Mrs. RWP and I have been visiting our daughter, son-in-law, and their two sons in Georgia's lovely neighbor to the west, the great state of Alabama. We plan to return to our home tomorrow, even though it has been raining all day today as if there is no tomorrow.

Our son-in-law's brother's daughter's husband went deer hunting in December and gave a great deal of venison to our hosts. Tonight we are having our fifth meal involving venison in the last three days. To recap, Saturday for supper we had spaghetti and meat sauce with venison being the meat. Sunday at the midday meal we had bacon-wrapped venison tenderloins with baked potato. For supper we had venison chili. This morning with our toast and scrambled eggs we had venison sausage. And in a few minutes we will be partaking of tonight's supper, country-style venison steak with pepper gravy.

Everything has tasted delicious. It has been a culinary treat. And there's even an "added bonus" as they say in infomercials: Deer meet contains less fat, less cholesterol, fewer calories, and more protein than beef or pork.

Who knows? One day I might become a vegetarian. But not today.

Email ThisBlogThis!Share to TwitterShare to FacebookShare to Pinterest
Labels: venison

All truths are equal, but some are more equal than others

Some guy named William Faulkner once said, "The past is not dead. In fact, it's not even past."

That being said, I just discovered today, 43 days into this new year, Dave Barry's 2015 Year In Review. I recommend it highly for your reading edification and pleasure because not only has Dave Barry already won a Pulitzer Prize, he is probably on somebody-or-other's short list to receive the Nobel Prize for Literature.

But I do hope you will read and enjoy his take on 2015 because (a) it proves that sarcasm is alive and well, (b) we ought to be able to laugh at ourselves, and (c) some other guy named George Santayana once said, "Those who cannot remember the past are condemned to repeat it."

Some guy named George Orwell once said something sort of similar to the title of this post.

Bits and pieces, tidbits and gewgaws

That is my way of saying that this post has no central theme. It contains unrelated minutiae, perhaps even ephemera. But trivia? Never!

Be that as it may, it can now be revealed that north Georgia is having its second snowfall of the season today as we speak. The first one occurred about two weeks ago and any trace of it has long since disappeared. Our area receives a lot more rain than snow in wintertime, and if the temperatures dip at the same time, we often get ice on the roads and the sidewalks and the trees and the cars. When it gets really bad, branches and even trees come crashing down. Life often comes to a complete stop until the ice melts and the debris is cleared away.

Moving right along, our oldest grandson turned 20 years old today and is no longer a teenager. On top of that, he is currently "batting a thousand" on his college's baseball team. I'm not kidding: 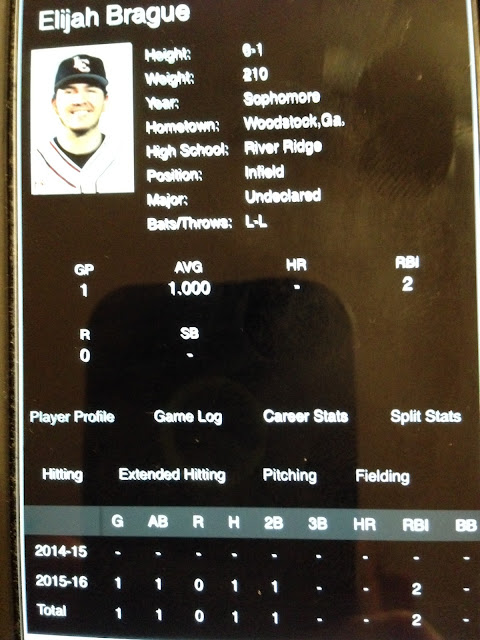 Sorry for the blurriness. I think my hand must have been shaking upon this momentous occasion. The baseball season has just begun and the team has won all three games played to date. Since Elijah played on the Junior Varsity team last year (which his school calls the Varsity Reserve), none of those Freshman-year statistics are included. Batting 1000 (that is, 1.000) is a very rare thing that cannot be sustained for very long. Ted Williams of Boston Red Sox fame, one of the best baseball players who ever lived, finished his career with a .344 batting average, meaning he got a hit about once out of every three turns at bat. In 1941, he posted a .406 batting average, making him the last Major League Baseball player to bat over .400 in a season.

The snow has turned to sleet. It may be a while before Elijah's career can resume.

I don't know what the English the Australians the Germans your country's athletic supporters do during halftime at football rugby soccer cricket futbol your favorite sporting event -- indeed, I do not know whether you even have a halftime during your favorite sporting event -- but here in the good old Yew Ess of Ay what happened during last night's Super Hideously Excessive Extravaganza Bowl is in no way typical.

Your average high school or college football game here in my country does not have Lady Gaga singing the National Anthem nor does it have Cold Play, or Bruno Mars, or Beyoncé and her minions performing (and I use the term loosely) a tribute to the Black Panthers.

No, indeed. We leave that to The Professionals.

Out here in Amateur Land, in Realville, where ordinary people live, we have marching bands.

Back in my day in my little town of Mansfield, Texas (population then: 964; population now: 65,000), when we marched onto the field at halftime on Friday nights our band had majorettes in front wearing boots and short, short, short satin skirts, twirling their batons and swiveling their hips, making their parents in the grandstand proud and thoroughly distracting the trombone players in the front row. But our high school band had only 46 members. We could make two -- count 'em, two -- formations. The first one was a football with laces down the center, which we presented to the visitors side. The second one was a letter M, which we presented to the home team side. On a typical Friday evening, if even only a few people were missing, none of the athletic supporters on either side of the field could make out what our formations were supposed to be.

It is therefore with great joy and not a little envy that I now present to you a wonderful (albeit a bit militaristic) salute to the U.S. armed forces in a halftime show performed by The University of West Virginia Mountaineers Marching Band! (about 5 minutes long).

(Full disclosure: I didn't watch the Super Bowl. I read about it this morning. So I suppose there is a fair amount of sour grapes in this particular post. Instead, I watched reruns of old episodes of Cops for a while, then topped off the evening with Downton Abbey, series 6, episode 6 -- the one in which Thomas the under-butler is seen weeping alone in the dark at the end of the program. I pray you are not doing the same at the end of this post.)

Senior night at the basketball court

Not senior as in a person of advanced age (like myself), but senior as in the final year of high school before a fellow goes off to university.

It was the final home game for the 2016 basketball team (basketball being a winter season sport) at the school where our grandson Noah, second son of our second son, has been a starter and co-captain during his senior year. There were two more games remaining on the schedule but they were "away" games -- meaning at the opponents' schools -- and one can hardly hold a senior recognition night at an away game, can one?

So, without further ado, here are shots of Noah before and after the game. I do apologize (British, apologise) for not including shots during the game, but I was too busy watching and cheering to take many any photographs.

Noah being introduced before the game and running past the cheerleading squad, who waved their shiny, gold pom-poms: 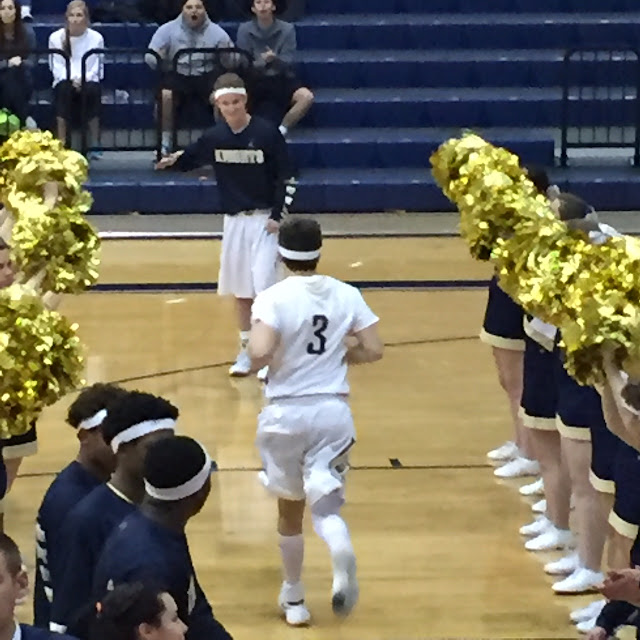 After the game, during the recognition ceremony, each senior player walked with his family through an arch of balloons and a tunnel of honor (British, honour) composed of ROTC students holding up swords: 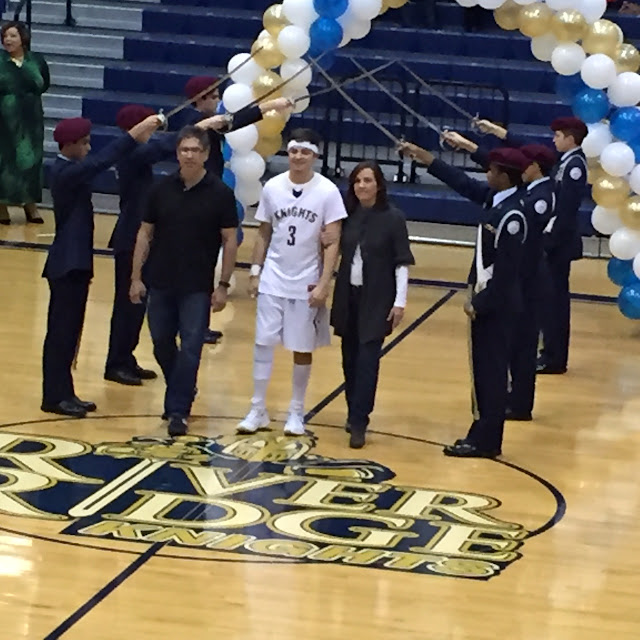 Each player's activities and accomplishments during his four years of high school were announced. Unfortunately, it was difficult to understand what anyone's accomplishments were because of the way the sound of the public address system echoed around the gymnasium. 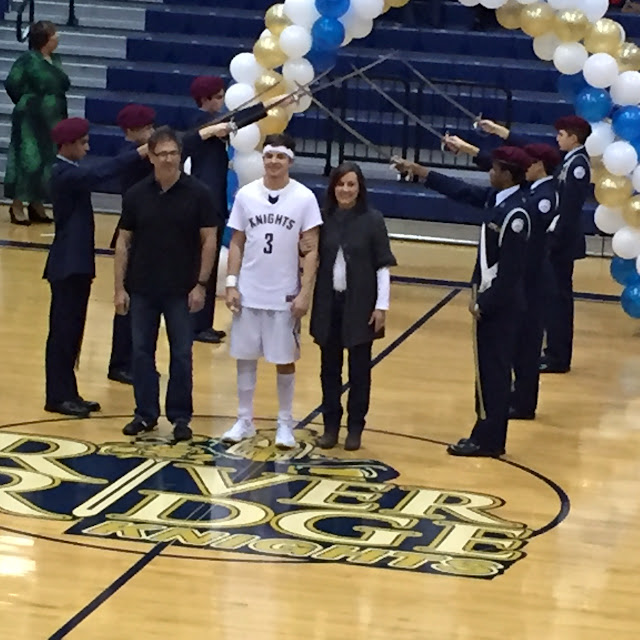 Finally, the basketball coaches came and shook hands with the honorees and their parents. Each mom was presented with a single long-stemmed rose, which event I also managed not to capture in a photograph: 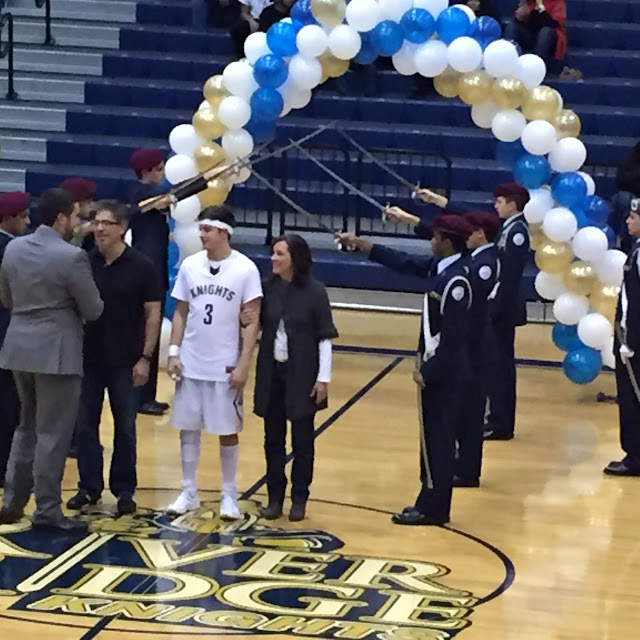 What can I say? Regardless of my skill or lack thereof with a camera, I was am a very proud grandpa.