A peek into antiquity

...by which I mean nine years ago, which is several lifetimes as lifetimes are counted in blogworld.

This blog began on September 28, 2007, so as of today (September 27, 2016) I have been blogging for nine years. Tomorrow -- what some might call my ninth anniversary -- is in actuality the first day of my tenth year of blogging. It is just this sort of attention to detail that keeps you readers coming back for more.

Unless it's my acerbic wit and sparkling personality.

Whatever it is that keeps you readers coming back for more, I am truly grateful and will never take any of you for granted.

That being said, here's that peek into antiquity that I promised up top:

The celebrating may now begin.

Email ThisBlogThis!Share to TwitterShare to FacebookShare to Pinterest
Labels: 9 years of blogging, another blogaversery (#9)

Tempus certainly does fugit, irrespective of whether you're having fun

Impossible. I myself am only 38.

Isotopes have half lives. Why can't we?

I'm hoping my half life will have been around 57, but that is neither here nor there.

Here is a photo of my son and his wife taken this past June at Panama City Beach in Florida. The water behind them is the Gulf of Mexico. 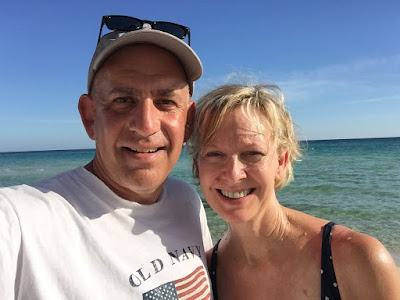 And here I am two months before my 38th birthday. If you must know, the year was 1969. This photo was made for the first passport I ever obtained, and despite what they say about passport photos, I consider it to be the best photo ever made of moi. 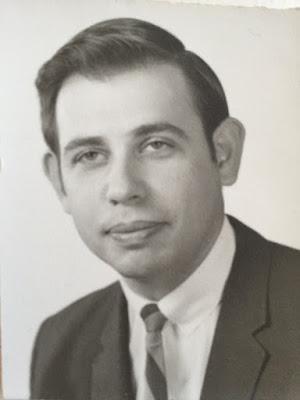 If all goes well and I keep breathing, I will turn 76 in March.

I am blogging less lately but enjoying it more -- wait, that's not really true. I am blogging less than I used to, and I suppose my advancing age has something to do with it. I am now somewhere between "beginning to slow down" and being overtaken by the "general malaise" that President Jimmy Carter used to talk about back in the '70s. Since I am also in my 70s now -- halfway through them, in fact -- I cannot claim to be the man I once was. Take my hair, for instance. Too late. Most of it is already gone. And my skin, my skin, the largest organ in my body and also in yours, has morphed into something unrecognizable. I am reminded of the old joke about the old man who decided to streak through his neighborhood and as he passed the bus stop one old woman said, "What was that?" and another old woman said, "I don't know, but it definitely needed ironing."

Oh, yes. Wondering whether I am enjoying things more now that I am doing them less. Some fellow once said, "Burt Reynolds puts his pants on the same way I do, one leg at a time" and some other fellow said, "That may be true, but he gets to do it more often." If you substitute the name of the hunk du jour for Burt Reynolds you will undoubtedly agree that the second man was a truth-teller.

Digressing seems to be what I do best.

I do think that I enjoy blogging as much as ever, but I just don't seem to get around to doing it as often as when I was in my prime had more energy could actually remember that a fair amount of time had passed since my last post.

So I'm blogging today, more because it fills up time and space than that I have something scintillating to say.

The truly cruel among my readership will now say, "It has been ever thus."

Until next time, I remain
Yr intrepid reporter,

Email ThisBlogThis!Share to TwitterShare to FacebookShare to Pinterest
Labels: on aging, on blogging less, on slowing down 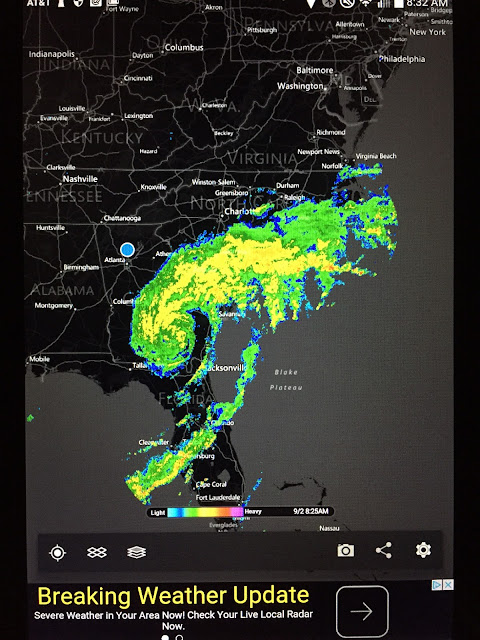 The blue dot is me, or rather, it is where I live. See it there, just above Atlanta?

The storm system is Hurricane Hermine, the first tropical hurricane to make landfall in Florida in eleven years. In 2005 we had Dennis, Katrina, Wilma, and Rita. The year before that we had Charley, Frances, Ivan, and Jeanne. You may not remember most of them, but surely Katrina rings a bell. Then, for eleven years, nothing. Well, there was "Super Storm Sandy" in 2012 that caused major damage in New Jersey and New York but its eye stayed at sea for most of its existence.

As a result, the weather people on television were going bonkers last night, way too bonkers, over a tropical storm that didn't even achieve hurricane status (sustained winds of 74 mph) until a few hours before it hit the mainland. Hermine is a Category 1 hurricane. By way of comparison, Katrina was a Category 5 hurricane.

Here are the categories of hurricanes:

Last night Hermine came ashore. I took the photo of the Doppler radar this morning.

The first thing I noticed, being a resident of the southeastern U.S. and fairly familiar with hurricanes, is how small the eye of the hurricane has become, which usually means the storm is dissipating and on its way to becoming merely a tropical storm again.

But am I in danger? Is Atlanta about to get soaked? Do I need to batten down the hatches in anticipation of some high winds?

The answer is: It depends on which way the storm is moving, and you can't determine that from a still photograph.

If the storm came ashore from the Atlantic and is moving to the northwest (the upper left corner of the photo. for the geographically challenged), Atlanta and environs could be in for some very bad weather. Fortunately for us, however, the storm came ashore from the Gulf of Mexico, near Tallahassee, and has been moving to the northeast (the upper right corner of the photo). Therefore, kiddies, it is not Atlanta but the eastern coast of the U.S. that may receive lots of water and wind soon. Another possibility is that the storm will go back over water and strengthen again in the Atlantic. Where it may go then is anyone's guess. It is enough to make the most seasoned weather forecaster go bonkers.