Alert the media! I am occasionally wrong

Speaking of questions, Bob M., my treadmill buddy at cardiac rehab three days a week, asked one out of the blue on Thursday. We had just checked our blood pressures when he suddenly asked, apropos of nothing, "Who said 'a chicken in every pot'?"

Since Bob is 80, I didn't have to explain who Al Smith was.

It was not Al Smith.

I was close, though (they say "close" only counts in horseshoes and hand grenades). I was definitely in the right neighborhood. In the U.S. presidential election of 1928, Republican candidate Herbert Hoover won the electoral college vote 444 to 87, defeating the Democratic candidate, Governor Alfred E. Smith of New York. During the presidential campaign, a circular published by the Republican Party claimed that if Herbert Hoover won there would be “a chicken in every pot and a car in every garage.“ I had the right year but the wrong guy.

Note that Herbert Hoover himself never specifically made such a promise, but that was the perception throughout the land. In actuality, less than a year after his election the stock market crashed. During the decade-long Great Depression that followed, many people didn't have chickens, pots, cars, or garages.

A memorable thing happened in 1931 when, on the president's birthday, radio announcer Harry Von Zell goofed, creating one of the most famous spoonerisms of all time when he inadvertently referred to Herbert Hoover as Hoobert Heever. 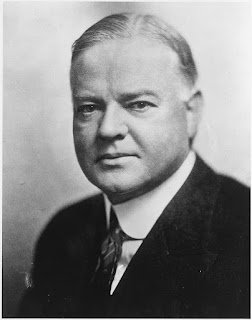 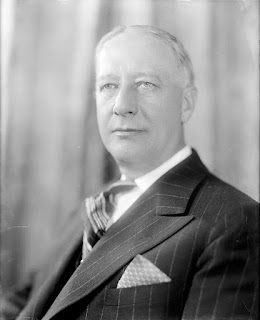 Which one looks more presidential to you?


To my mind, Mr. Hoover looks like a very kind Methodist minister (he was Quaker) and Mr. Smith looks like either a robber baron of the Victorian era or a New York City police commissioner.

Not that I'm given to making snap judgments.

Later, while we were walking on adjacent treadmills, I asked Bob why he had asked me that question. He replied that he had seen his wife putting a chicken in a roaster pan.

Moral of today's post: There is generally a perfectly logical reason for everything that happens even if you can't see it at the time.

In the comments section of the previous post, the following appeared:

this leads me to question:
is your name Rhymes?
and do you have plague?
"the" plague or are you just plagued?

plague is a silly word when over used

and I shall now address her three questions and her statement one by one.

Q. Is your name Rhymes?
A. Rhymes is part of my blogger name, Rhymeswithplague, or RWP for short, which I arbitrarily chose as my blogger initials by isolating the first letter of each of the three words (rhymes, with, and plague -- note that I used the Oxford comma there) that one might perceive as being the component parts of my blogger name although they are not; my blogger name is, as I have already said, Rhymeswithplague, a single but all-encompassing word that pleases me. My actual given names in real life, although you did not ask that question, are Robert and Henry. My surname is Brague, which just happens to -- you might have guessed -- rhyme with "plague"; I began saying this some years ago in an attempt to get people to pronounce my surname correctly. Many people said Bragg and some people said Brahg and some people even said Bragoo to rhyme, I suppose, with Mr. Magoo. My name definitely does not rhyme with Mr. Magoo. Some people still have difficulty pronouncing my name, so I am considering changing my blogger name to rhymeswithegg, but don't hold your breath.

Q. "the" plague or are you just plagued?
A. Although this is a sentence fragment and not technically a question, I will do the gracious thing and try to answer to the best of my ability. I do not, as far as I know, have plague (see previous answer), "a" plague, or "the" plague. What do you mean by "the" plague, exactly? There are a number of plagues, as this list indicates, although I suppose you meant the diseases, of which there are at least three: bubonic, pneumonic, and septicemic (once again I have used the Oxford comma; I am nothing if not consistent). I am occasionally plagued by questions from readers, however.

Q. Plague is a silly word when over used
A. This is not a question either. But here's one: What do you mean by "over used"? To my mind, that is a very subjective term and cannot be answered with objectivity, as one man's meat is another man's poison, so to speak. Same goes for "silly".

Now I have a question for you. Is Australia really down under?

To readers everywhere: Your questions are important to us and will be answered in the order they are received. The current wait time is seven months, 14 days, 21 hours, and 42 minutes (and I am still using the Oxford comma). 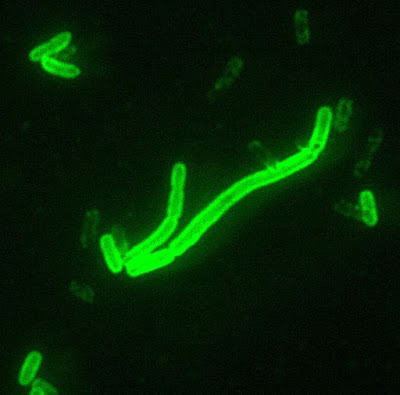 (Photo courtesy of the Centers for Disease Control and Prevention's Public Health Image Library. It is in the public domain and used by permission PD-USGOV-HHS-CDC)

Ifs and buts, or Having fun with language

Pam Doyle (real name of a blogger in southwest Washington who calls herself Hilltophomesteader, I suppose because she lives in a homestead on a hilltop) took up the theme of the previous post (What If?) in the comments section, asking, "What if 6 days went by and we didn't see a post from RWP???"

I posted that post on August 12 and Pam must have written her comment on August 18, although because of my slowness in moderating comments it wasn't published until August 20. Now it is August 22 (10 days, forsooth!) and I still haven't posted another post.

So here at last is another post to tickle your collective fancies, although it might prove to be both uncomfortable and embarrassing to go through life with tickled fancies (collectively, of course).

I shall take the lazy man's way out, however, and refer you via this link to a fascinating -- I urge you to read every word -- look at the possible origins of the idiom "If ifs and buts were candy and nuts".

Email ThisBlogThis!Share to TwitterShare to FacebookShare to Pinterest
Labels: ifs and buts, origin of the idiom ifs and buts

...my Bonnie didn’t lie over the ocean?

...everywhere that Mary went the lamb did not want to go?

...you could check out anytime and leave whenever you liked?

...auld acquaintance were never forgot and always brought to mind?

...that doggie in the window isn’t for sale?

...you take the high road and I take the low road and I’m not in Scotland afore ye?

...Jimmy cracked corn and I cared quite a bit?

...not all of us go out to meet her when she comes?

...I loved thee but I didn’t try to count the ways?

Time may march on but some things remain constant

Mrs. RWP celebrated another birthday near the end of July. We welcomed one grandchild home from a two-week trip to Mumbai (formerly known as Bombay). We prepared to bid adieu to another grandchild who leaves this week for her first year of university in another exotic locale, Athens, Georgia.

Still another grandchild started his second year at university by moving to a new dorm: 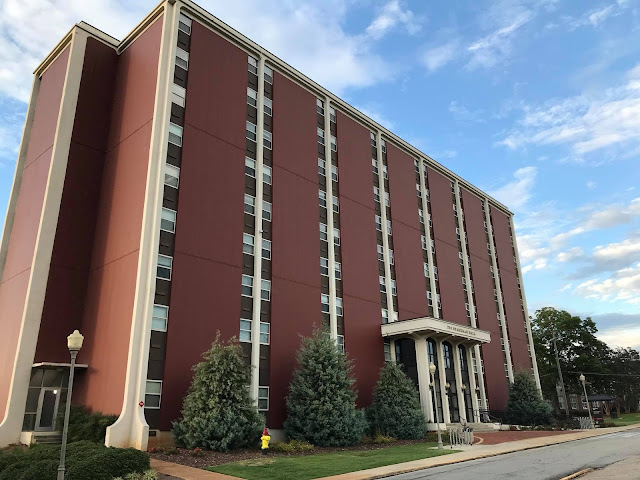 His seventh-floor room has a stunning view of the hills and clouds of northern Alabama: 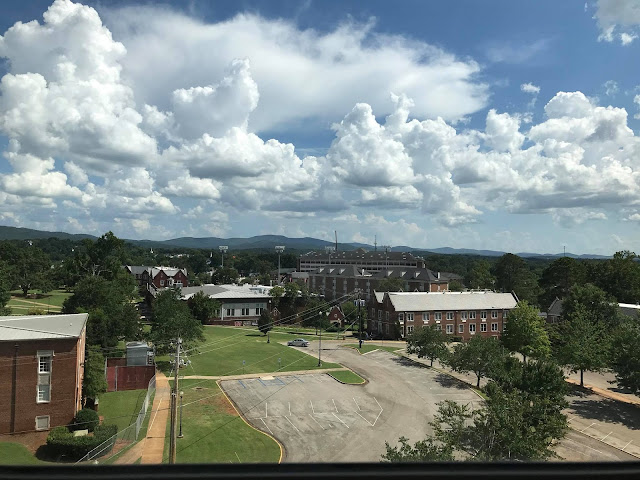 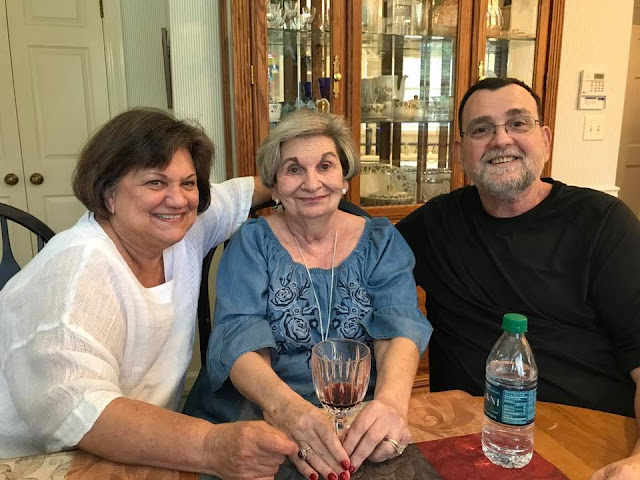 Half a world away, in a school in a village in Kenya, our friend Linda B. and her teaching staff stay busy with 82 kids, almost double last year's enrollment... 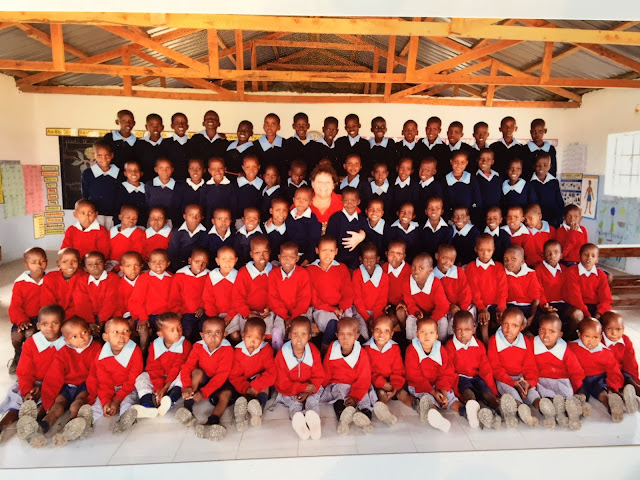 Mrs. RWP and I are sponsoring two of them, and by "sponsoring" I mean paying for their tuition: 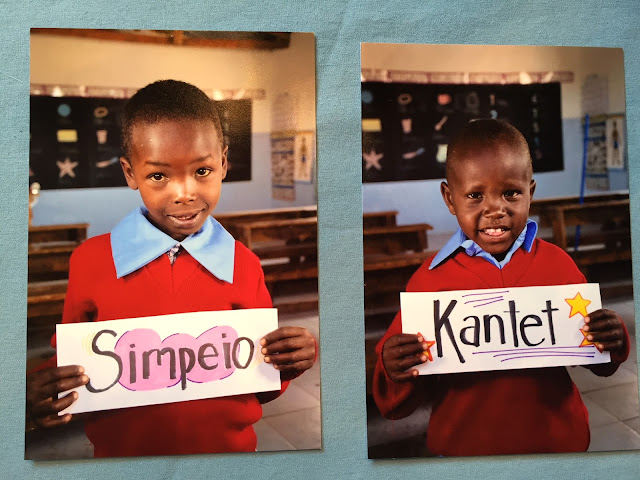 Somewhere, Air Force One is landing so that Donald Trump can hold another rally.

Probably not in this city, though: 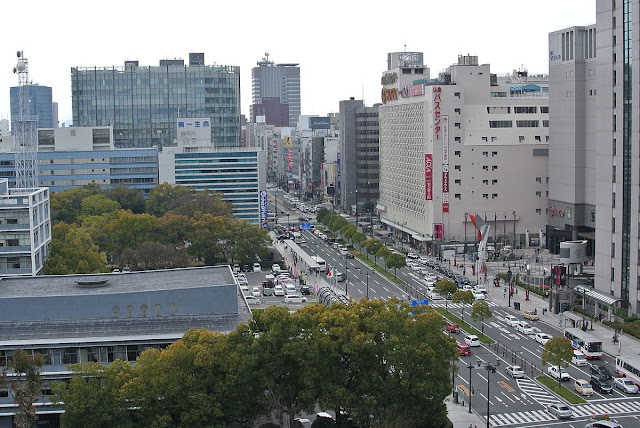 Except, of course, when it doesn’t.

"Holy place names, Batman!" Here's a list of holy-sounding place names that I threw together. Can you identify the ones ...