It's true. While many of you were sleeping, I was winning a contest.

Author and blogger Frances Garrood, who lives in Wiltshire in the U.K., said yesterday she was "offering a small mystery prize for the best limerick on the subject of...writing limericks." Something snapped in my brain. Resolving to keep it clean, I tossed one off and submitted it:

A blogger whose real name is Bobby
Said, "Limerick writing's my hobby.
I don't know which is worse,
The smell of my verse
Or the people queued up in the lobby."

Frances loved it, so I submitted another one:

A limerick writer, Nan Tucket,
Put all of her works in a bucket.
But next to George Harrison
Hers paled in comparison;
'Twould be rude to divulge where she stuck it.

Frances said, "Even better! You're on a roll today, aren't you?"

Whereupon she promptly retired for the night.

Not me. Four time zones to the west, I kept writing:

Though writing a limerick is easy,
Especially the type that are sleazy,
It's hard to refrain
From becoming profane
And a struggle to keep one's tone breezy.

The problem, dear reader, is textual.
Whether to be intellectual
And be thought a prude
Or succumb to the lewd
And write something thoroughly sexual.

A contest with limericks? Curses!
Composing those damnable verses
Fried my brain to a crisp,
"Call a doctor," I whisp-
ered, "and two psychiatric ward nurses."

Today I awoke to discover that I had been named winner of the contest. Frances did not single out a particular limerick. I think I overwhelmed her with sheer volume.

I am retiring undefeated as the champion of writing clean limericks about writing limericks. And I am keeping an eye out (it's only an expression) for that small mystery prize.

P.S. - I hasten to add that limerick writing is not my hobby at all. I just said that in the first limerick because I needed something to rhyme with "Bobby". But the real champion appears to be Garrison Keillor of National Public Radio fame. Watch the last few minutes of his final News From Lake Wobegon (17:22) from last July's final Prairie Home Companion show with him as host.

I found some old family photographs in an envelope and tossed them onto the bed in the spare room. In olden times this photo might have been called Still Life: Blue and Yellow Quilts with Photographs. 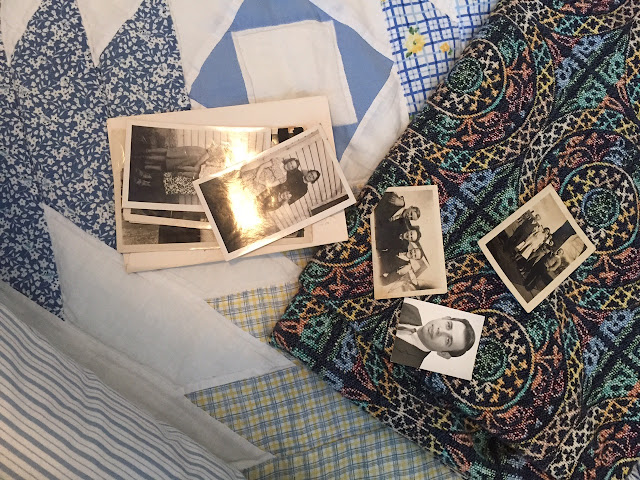 All of the photos except my passport photo were taken way back when in Cedar Rapids, Iowa, probably between 1925 and 1948. My passport photo, which I showed you a couple of posts back, was made much more recently in Boca Raton, Florida, in 1969. This also may sound like way back when to some of you younger readers, but it really isn't in the overall scheme of things.

The following photo is definitely from the 1920s. My dad, Ted Brague, the youngest of the five Brague brothers, is on the left. His brother Dan, the fourth Brague son, is on the right. The fellow in the middle is an unidentified friend. You must deal with the fact that the photo is cattywampus on your own; no one ever said that reading a post by moi would be easy. The preceding sentence illustrates perfectly the use of the semicolon. 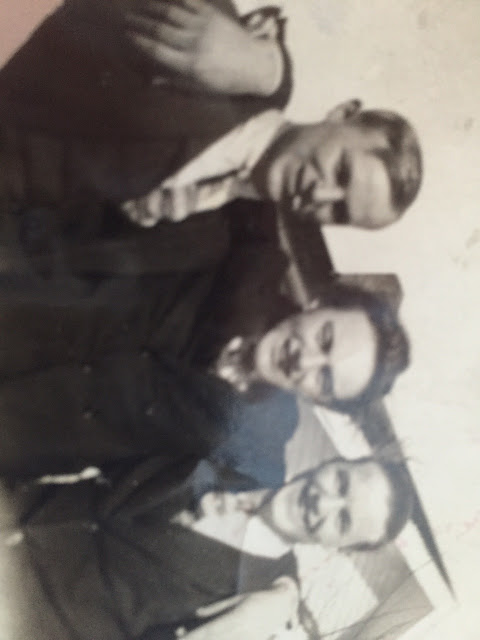 Mrs. RWP and I find ourselves in deepest Alabamistan once again after a long absence. Yesterday afternoon we sat in the sun in the high school football stadium in Pell City watching a marching band competition. It was worth it; not only were our two grandsons featured in a trumpet and mellophone* duet of "Desperado" during their school's performance, their band received Superior ratings and were named Best Band in Class (AAA). We were also treated to two trains passing by during the afternoon just behind the opposite-side stands, one a very, very, very long freight train and the other an Amtrak passenger train enroute from New Orleans to Atlanta, a rare sighting in today's world unless one lives in the Boston-New York-Washington corridor where Amtrak trains are as thick as thieves pandas in China kookaburras in Australia.

When we get back home I shall attempt to show you a video of the band's performance. As it will be my first attempt in nine years of blogging to embed a video in a post, I fervently hope it will appear right side up.

*A mellophone is the instrument a French Horn player uses during marching season. It looks like a trumpet with a larger bell and produces a lower, mid-range (and therefore mellower) sound.

Now is the time for all good men to blah blah blah Well, what do you know! I did it! From my phone! For the first time! Live and learn,...