Pin the tail on the troglodytes

The three gentlemen I showed you in yesterday's post are (or, more accurately, were):

I invite you to enjoy Noel Coward singing "Mad Dogs and Englishmen" (2:24), which I have included here in commemoration of the glories of yesteryear, troglodytes everywhere (you know who you are), and the fact that yesterday millions of Englishmen went out in the midday sun and voted to take their country out of the European Union.

Two weeks without posting is a lifetime in the world of blogging. Social media being "where it's at" today, I may just be considered a troglodyte.

trog-lo-dyte [trog-luh-dahyt] noun. 1. A prehistoric cave dweller. 2. A person of degraded, primitive, or brutal character. 3. A person living in seclusion. 4. A person unacquainted with affairs of the world. 5. An animal living underground. (American dictionary)

troglodyte /trɒɡləˌdaɪt/ noun. 1. A cave dweller, esp one of the prehistoric peoples thought to have lived in caves. 2. (informal) a person who lives alone and appears eccentric. (British dictionary)

Anything I say three times is true.

Be that as it may, forty-seven years ago today, on June 23rd, 1969, the United States government forced IBM to "unbundle" its software from its hardware and market the products separately. A day that will live in infamy the annals of computing industry history, at least among IBM troglodytes like myself.

Today, June 23rd, 2016, another sort of "unbundling" may be in the making. The inhabitants of the British Isles (U.K. to you) are deciding whether to remain in the European Union or to leave, in a national referendum dubbed "BREXIT".

Only time will tell.

Fortunately, Rip van Winkle has plenty of that.

I will now crawl back into my hole, but not before showing you some troglodytes. 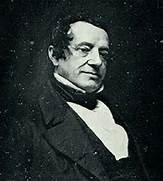 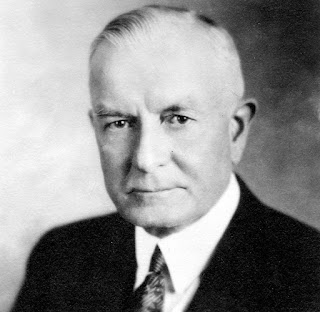 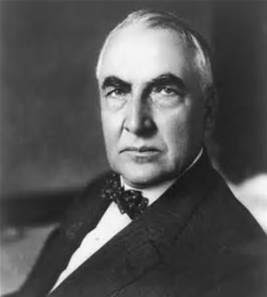 Without cheating, can you identify them? 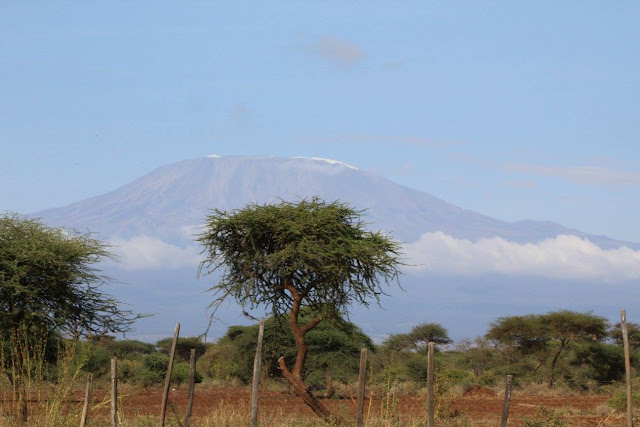 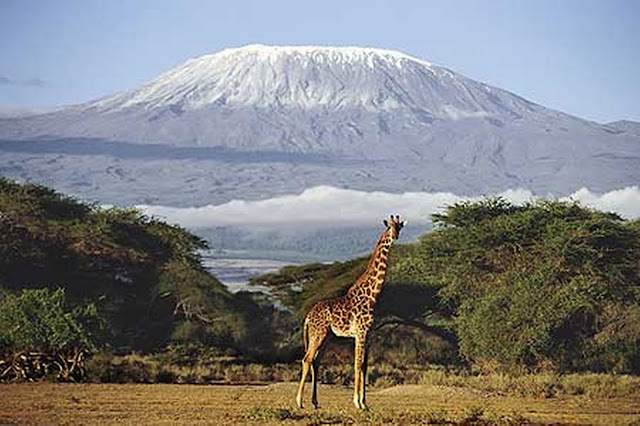 Down where Matthew is, among the people, the temperature tomorrow is expected to reach 73 degrees Fahrenheit (23 Celsius), which is quite pleasant. Here where I am in Loonyville Canton, Georgia, however, the high is expected to be 93 degrees Fahrenheit (34 Celsius), which is hot and humid. This strikes me as quite odd, since Matthew is in the tropics (latitude 2.8 degrees South) and I am in the temperate zone (latitude 34.24 degrees North). I suppose the reason has to do with differences in altitude. But I don't want to be scientific right now. I want to be literary.

Here, for your reading pleasure and general edification, is Ernest Hemingway's short story, "The Snows of Kilimanjaro". Published in 1936 in Esquire magazine, it was made into a film in 1952 starring Gregory Peck, Susan Hayward, and Ava Gardner. The film's ending differs from Hemingway's.

Fair warning -- it has very little to do with either snow or Kilimanjaro.

Read Hemingway's story. See the film if you can, or read about its differences in Wikipedia. Then, and only then, discuss.

A rose by any other name would smell as sweet

Let's explore that a little bit. 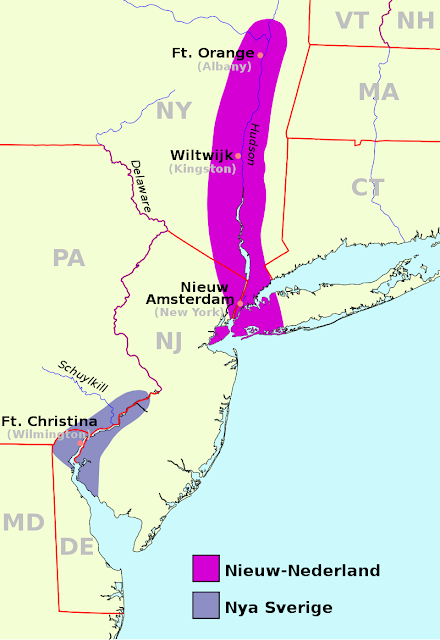 (Map used in accordance with the provisions of CC BY-SA 3.0)

Pennsylvania has York and Lancaster. Connecticut has Hartford and New London. Massachusetts has Boston and Plymouth and Cambridge. Don't forget New Hampshire, which has Manchester. Six states are known collectively as New England.

In Florida, which once belonged to Spain, the street my wife's parents lived on crossed both Northumberland and Westmoreland. Several states have a Mansfield (Ohio, Pennsylvania, Georgia, and Massachusetts do) but the one I grew up in -- Mansfield, Texas -- was not named after the Mansfield in England. No. It was named after two men, R.S. Man and Julian Feild (yes, spelled that way, F-E-I-L-D), who built and operated a grist mill around which the town grew. Eventually the locals grew tired of correcting other people's misspelling and apparently just said, "Whatever." But my Texas Mansfield is definitely not named after Mansfield, England.

What America is definitely full of (don't be making up your own post) is Native American names. From Narragansett in Rhode Island to Appalachicola in Florida to Chillicothe in Ohio to Tonawanda in New York to Tuscaloosa in Alabama to Chattahoochee here in Georgia, one encounters them everywhere. There's Walla Walla in Washington, and Mishawaka in Indiana, and Manitowoc in Wisconsin, and we must not forget Pottawattamie County in Iowa, where the county seat, Council Bluffs, was so named because a council took place on some nearby bluffs in 1804 between the members of the Lewis and Clark Expedition and -- wait for it -- some Native Americans. But one cannot assume that an unusual-sounding, multisyllabic name is Native American. Ypsilanti in Michigan, for example, honors Demetrios Ypsilantis, a Greek hero in Greece's War for Independence in the 1820s.

Atlanta had a couple of other names in its early years, Terminus and Marthasville.

"My kind of town Chicago is," sang Frank Sinatra, managing to sound like Yoda while cleverly avoiding the fact that "Chicago" is derived from a French rendering of the Miami-Illinois word shikaakwa to denote a particular botanical. According to Wikipedia, the first known reference to the site of the current city of Chicago as "Checagou" was by explorer Robert de LaSalle around 1679 in a memoir, and Henri Joutel, in his journal of 1688, noted that the wild garlic, called "chicagoua", grew abundantly in the area. "My kind of town, Wild Garlic is" just doesn't have the same pizzazz.

You want Dutch names? Fishkill and Peekskill and Saugerties in New York, Schuylkill in Pennsylvania. You want Spanish names? We have mucho many, many, many of those: San Francisco (St. Francis), San Miguel (St. Michael), Las Vegas (The Meadows -- no, really), Los Angeles (The Angels), which is actually a shortened form of its original name, El Pueblo de Nuestra Señora la Reina de los Ángeles del Río de Porciúncula (The Town of Our Lady the Queen of the Angels of the Porciúncula River), Las Cruces (The Crosses), Santa Fe (Holy Faith), Santa Cruz (Holy Cross), San Diego (St. James), San Antonio (St. Anthony) -- I think I am detecting a pattern here.

I am also detecting that this post is getting a bit long in the tooth without any discernible purpose, so for now, let me just say, "Toodles."

[Note to Loyal Readers Who Made It This Far: I won't be blogging for a few days as Mrs. RWP is having surgery on her second eye tomorrow and I will be concentrating on being a good caregiver. --RWP]

Tom Gowans, Hippo, the blogger who lives in Angola, has written nothing on his blog, A Hippo On The Lawn, since March 18, 2015, almost 15 months ago. (That date happened to be my birthday, but it is completely irrelevant.) Many wondered what had happened to him. All efforts to communicate failed. I think John Gray in Trelawnyd, Wales, may have been alone in being able to contact him once or twice.

Today, however, June 4, 2016, I received, along with several other privileged recipients, a wonderful surprise: An email from Tom! No mention of his leg. No mention of his restaurant. Only the following (I asked for and received permission from Tom to re-publish it here):

I would very much like to have said that her name was chosen as a nod towards tolerance, harmony, freedom of expression and peaceful co-existence regardless of race, creed or colour, 'je vous présente ma fille, Charlie…'

Sadly, given that such is Marcia's fascination with the British Royal family she wanted to name our humble two bedroomed timber cottage, 'Clarence House', I rather suspect Charlotte owes her name to Sky News and its non-stop coverage of the royal birth. Still, I get the last laugh; I can call her Charlie, which I think is a really sweet nickname for a girl, and it also happens to be the name of my dog so there will be an economy of effort when calling them both to heel.

Charlotte Teresa Manuel-Gowans, born 19.33hrs on the 30th May 2016, weighing 3535 grammes to the delight of both parents and her brothers Dominic and Alex. Both Marcia and Charlie are in the best of health. 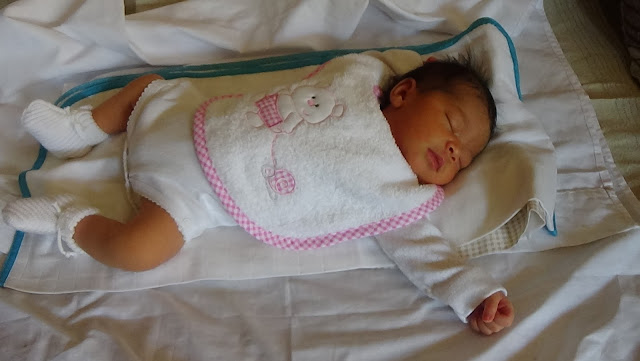 Email ThisBlogThis!Share to TwitterShare to FacebookShare to Pinterest
Labels: A Hippo On The Lawn, blogger Tom Gowans, Hippo, Tom Gowans

Signs of the season

Last month our daughter sent Mrs. RWP a beautiful bouquet for Mothers Day. The flowers lasted a long time. I call this view "Side A": 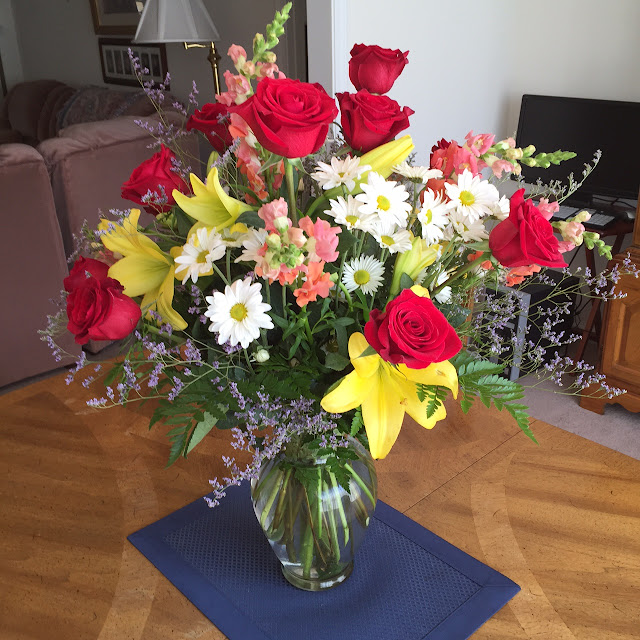 In the background on the left you can see a mauve sectional sofa. It is being picked up and taken away today by a charitable organization's thrift shop to make room for some new living room furniture that we ordered the day before our 53rd anniversary. 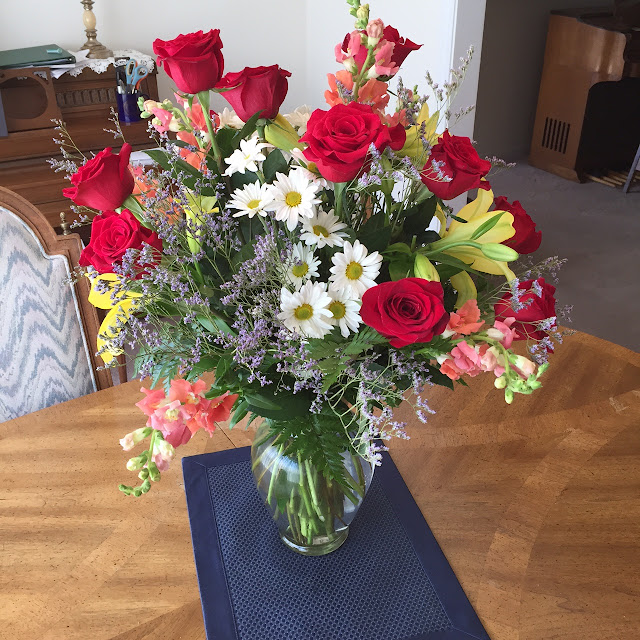 About the time the flowers from our daughter were beginning to droop, the gardenia bush by the patio was just beginning to bloom: 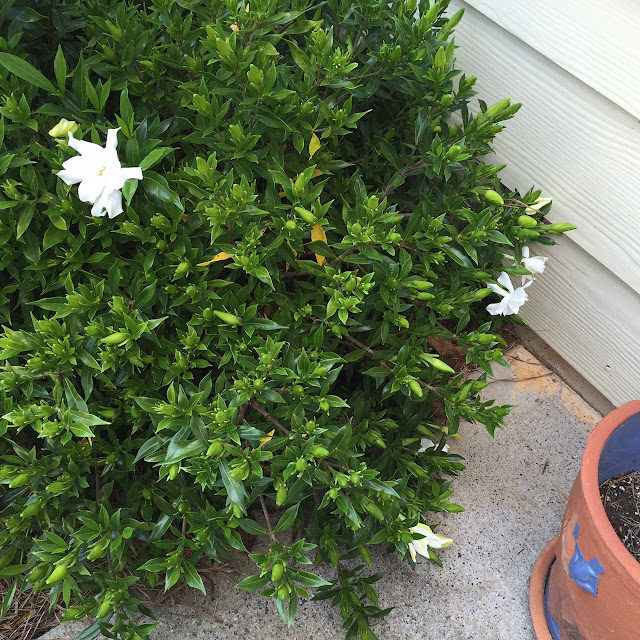 A few days later there were a few more gardenias: 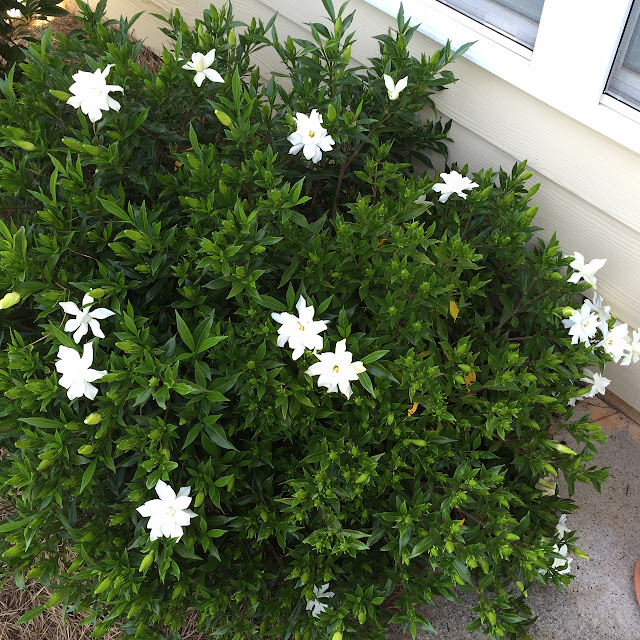 Now the bush is blooming its guts out. Mrs. RWP says that is its way of thanking me for saving its life last winter when I covered it with a sheet several times to protect it from nights below freezing. We have "dead-headed" the old blooms more than once, but they continue in profusion. My 87-year-old neighbor Rube (that's his name) has spent several years terracing the hill in his back yard, building stairways, and planting many, many plants. Rube works very, very hard. This is the view from my bedroom window: 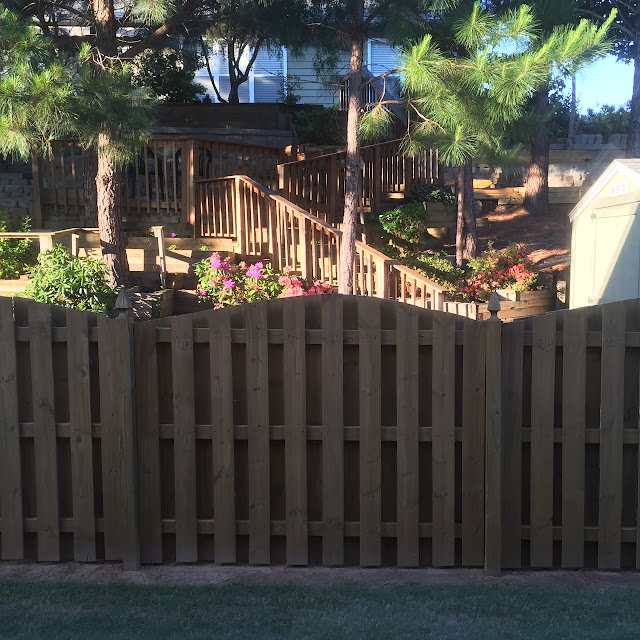 A closer look reveals that the plants are either mountain laurel or rhododendron: 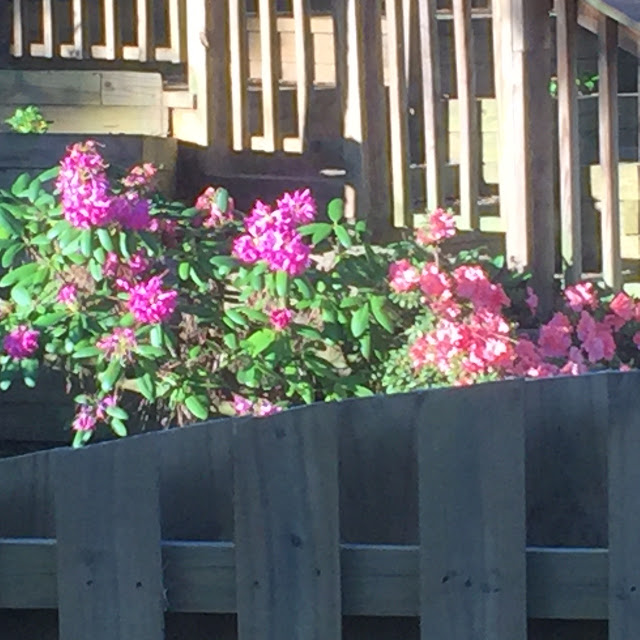 Spring is also afghan-crocheting time at our house. It has been that way for three years now and will remain that way for three more years as our grandchildren graduate from high school and begin university. Mrs. RWP decided to make an afghan for each graduate in the colors of the school each chooses to attend. In Spring 2014, Elijah's colors were red and black: 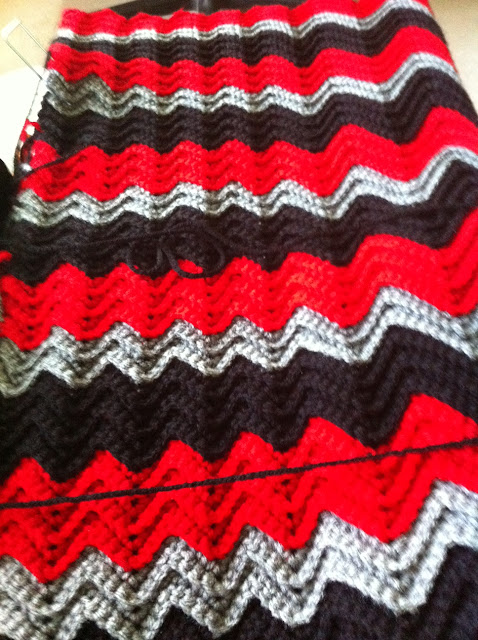 In Spring 2015, Matthew's colors were blue and white: 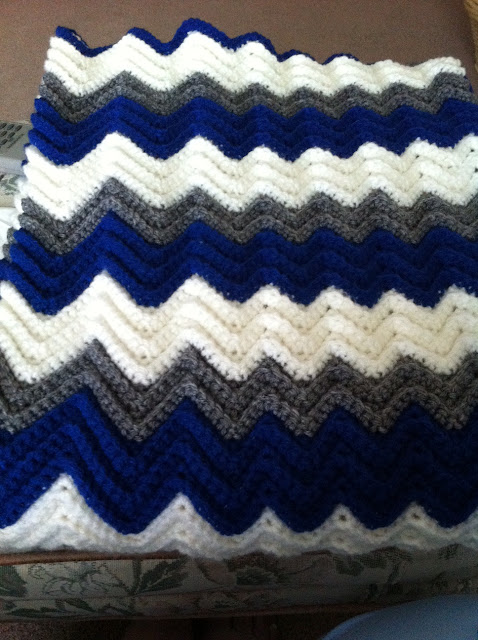 This year, Spring 2016, Noah's colors happen to be black and gold. If I do say so myself, I am getting better at photographing afghans with each passing year. 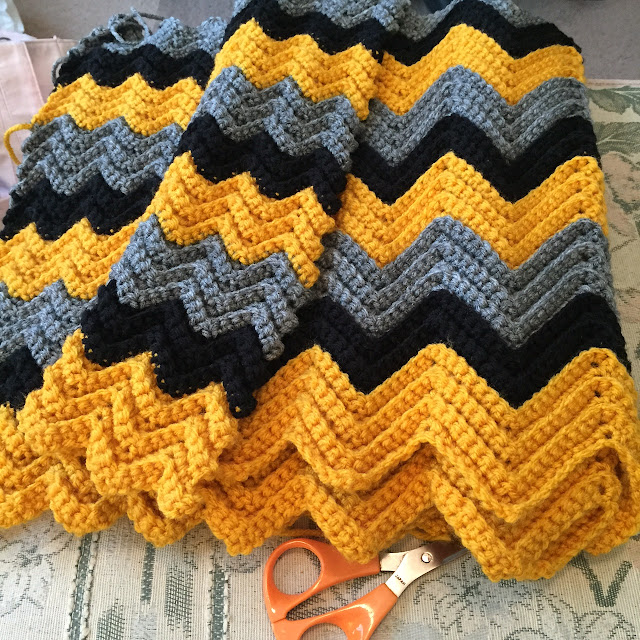 I thought about calling this post "Potpourri, continued" but I liked "Signs of the season" better.

Spring is moving right along and soon summer will be icumen in. You know what that means.

P as in Predicament, B as in Barbiturate, O as in Ophthalmologist

Somewhere in the back of my mind I think we may have talked about this before, long ago perhaps, but we're going to talk about it again....