STOP THE PRESSES! I'm from Yorkshire!!!

From time to time I have done a bit of genealogical sleuthing to learn more about my roots, but I would not say I am obsessed with the subject. Mrs. RWP might disagree. Still, I have never plunked down one red cent to ancestry.com or any other search site for the privilege of seeing their data. I do remember that my father used to say that his mother told them they were related to U.S. President Grover Cleveland.

It was interesting and I was curious but never interested enough to pursue the subject.

This week I pursued it (but I still didn't spend any money).

I already knew that my father's mother was Edith Lillian (Johnson) Brague (1877-1938) and that her mother was Bloomy Jane (Cleveland) Johnson (1840-1900), so I began tracing Bloomy Jane's ancestors this week and went back as far as an Edward Wynne who was born in Yorkshire in 1582 and died in Yorkshire in 1606, who may have been my tenth great-grandfather.

I say maybe because it hinges on whether the Edward Wynne who was born in Yorkshire in 1582 and died in Yorkshire in 1606 was the father of an Edward Winn who was born in Suffolk in 1604 and died in Massachusetts in 1682; no one seems to know for certain. The Suffolk Edward had a daughter named Ann who became the wife of a Moses Cleveland who turned out to be my eighth great-grandfather and President Grover Cleveland's fifth-grandfather. Moses Cleveland and Ann (Winn) Cleveland eventually emigrated from England to America and died in Massachusetts (Ann in 1682 and Moses in 1702). I have more information about my ancestors but I won't bore you with it.

I may be other things too -- there are connections on the Cleveland side to Ipswich in Suffolk -- but once a Yorkshireman, always a Yorkshireman.

That's my story and I'm sticking to it.

[Editor's note. There seems to be a fly in the ointment in that my newly found long-lost cousin Peggy out on the West Coast tells me that she has a photograph of little Edith Lillian Johnson being held by her great-grandfather, Arthur Cleveland, and in my searchings this week I didn't find an Arthur Cleveland. So perhaps I have been barking up the wrong tree (pun intended) and more research is warranted. I hope it doesn't interfere with my being a Yorkshireman. --RWP]
at May 24, 2016 10 comments: 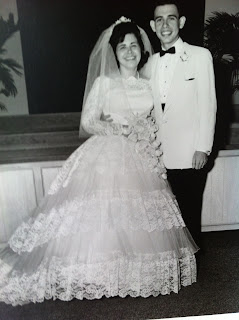 Email ThisBlogThis!Share to TwitterShare to FacebookShare to Pinterest
Labels: our wedding day

...or, as we say in English, this little girl is amazing!

Amira Willighagen, 9 years old, appeared on Holland's Got Talent in 2013. She seemed normal in every way until she began to sing.

Listen to her sing "O mio babbino caro" (7:50) and you'll think she is verbazingwekkend too.

One judge said Amira had the soul of Maria Callas. He may be right. Here is Maria Callas singing the same song (2:09). Puccini's aria is in Italian, of course, but since this post has a more international flavor than my usual ones, Miss Callas's rendition includes a translation in French.

We aim to please.

"We" forsooth, or isn't doomsday by definition unsurvivable?

So just in case everyone continues hell-bent for leather to put candles on birthday cakes in spite of the wonderful suggestion in my last post and global warming continues unabated, hastening the end (a scant 500 million years hence) or not (the end could happen sooner, when we least expect it, perhaps on a sunny afternoon next October, for example), I urge you to read what some nice scientists at Columbia University have published, a learned treatise on what we will need to do to survive doomsday. The article is brought to us courtesy of an internet news service in Australia, wouldn't you know, even though doomsday is by definition, as I mentioned in the title of this post, something no one will survive.

The comments after the article are interesting too, but I would really love to hear my readers' reactions.

It occurs to me that by the time our race is that old, perhaps we ("we" forsooth) having grown weary of the world like Tolkien's elves, will be ready, even eager, happily anticipating -- mama in her kerchief and I in my cap, as it were -- lying down for the longest of all winter naps, but that, I suppose, is beside the point.

What concerns me more than any of that is the fact that my writing and thought processes are becoming more and more like Billy Ray Barnwell's (q.v.) every day.

How to reduce global warming

It came to me in a flash.

There are roughly 7,300,000,000 people alive on planet earth today (actually there are more than that, but I'm rounding to keep things simple) and there are 365 days in a year. Therefore, every single day, 20,000,000 people celebrate their birthdays.

It might even usher in a new ice age.

I don't know why no one has thought of this before.

Someone should nominate me for a Nobel Prize.

It's May Day, and there may be faeries at the bottom of Yorkshire Pudding's garden (he said so himself)

...but something else is at the bottom of mine. 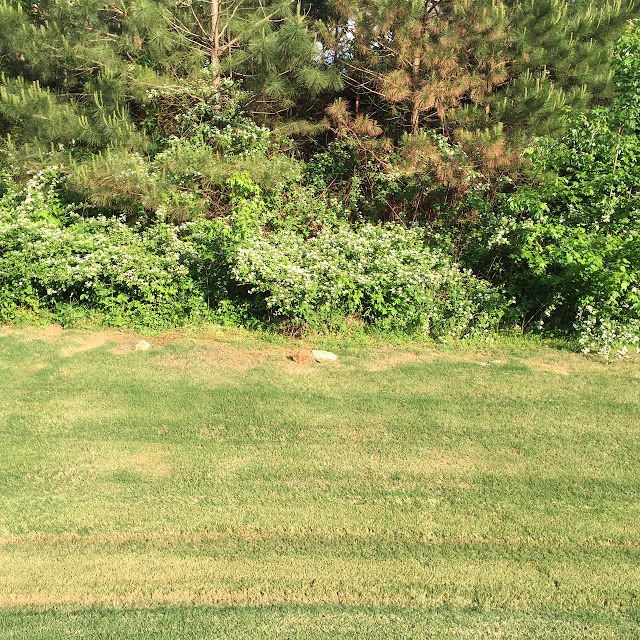 There, just past the rocks. Let's have a closer look, shall we? 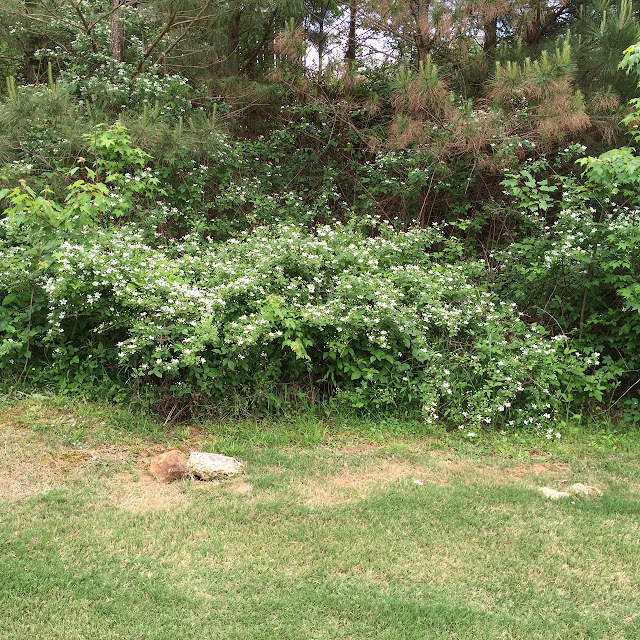 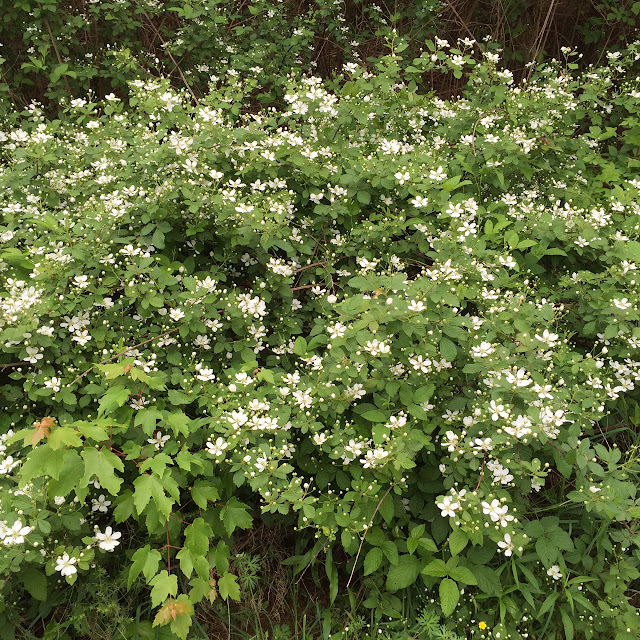 Yes, there definitely are -- or more accurately, there soon will be... 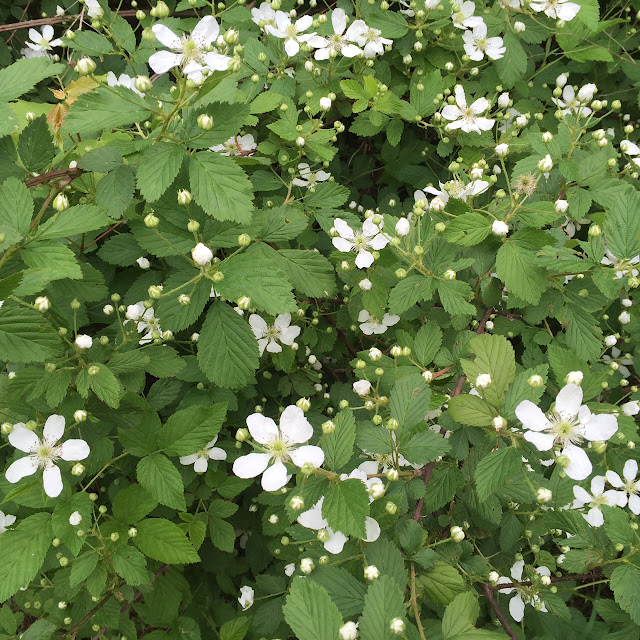 ...BLACKBERRIES at the bottom of our garden! 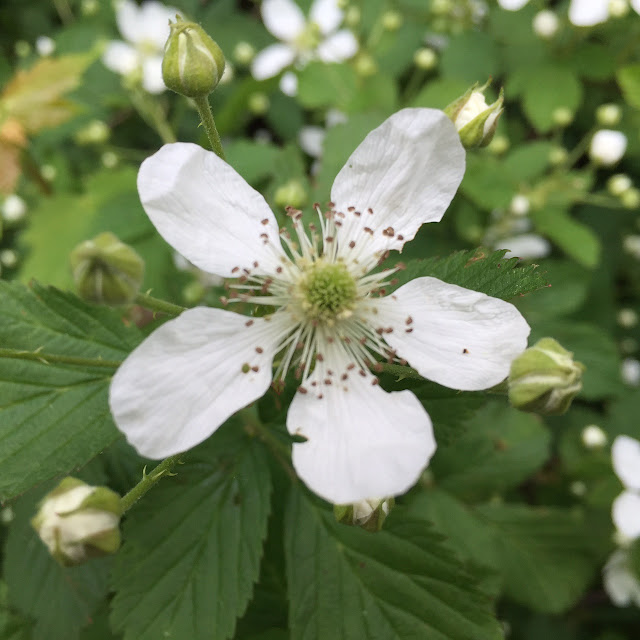 To commemorate this most auspicious occasion -- also known as spring -- I invite you to watch Beatrice Lillie, Yorkshire Pudding's favorite singer, performing "There Are Faeries At The Bottom Of Our Garden" (4:56) from The Ed Sullivan Show some time during the 1950s.

Email ThisBlogThis!Share to TwitterShare to FacebookShare to Pinterest
Labels: Beatrice Lillie, blackberry bushes, There Are Faeries At The Bottom Of Our Garden, white blossoms
Newer Posts Older Posts Home
Subscribe to: Posts (Atom)