The longest journey begins with a single step

Of all the characters created by Lily Tomlin during her career, I like Ernestine the Telephone Operator best. She kept us all laughing with her "One ringy-dingy, two ringy-dingies" and "A gracious hello. Is this the party to whom I am speaking?" and "We don't care. We don't have to. We're the telephone company."

But I don't want to talk about ringy-dingies today, I want to tell you instead about an actual ring.

First, however, I want to say that a person can still learn new things at the advanced age of 80 simply by reading blogs. I am living proof. Just this week I ran across two words I had never encountered before, obsidian in Tasker's blog (his friend gathered some while hiking in Iceland) and profiterole in Rachel's blog (she had one for dessert).

You may have heard also of British author J.R.R. Tolkien's Lord of the Rings trilogy in which he describes "One ring to rule them all, one ring to find them, One ring to bring them all and in the darkness bind them". That is not the ring I want to tell you about today. You can learn about Mr. Tolkien's ring for yourself by reading his three books or viewing Peter Jackson's three films based on them. 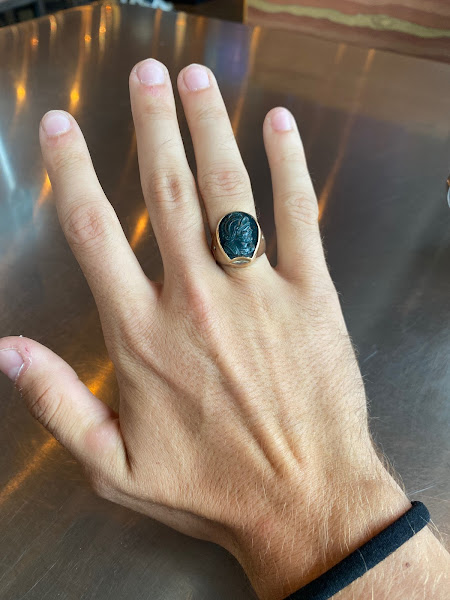 This particular ring's story and our family's history are intertwined. Let me explain.

Around 1890 or a little earlier it is believed that someone in Denmark with a great deal of talent and skill carved a knight's head into a small piece of bloodstone and had it made into a man's ring. Bloodstone, a dark green mineral containing flecks of red, is not worth a lot as minerals go; it is considered one of the "semi-precious" gems. It also is one of two birthstones associated with the month of March -- the other is aquamarine -- and, like onyx, has often been used in men's jewelry.

By around 1910 the ring was owned by a Mr. Nelson who lived in the state of Wisconsin in the United States. He boarded for several years with my paternal grandparents, who had five sons -- Art, John, Leo, Dan, and Ray. Ray (or, as he was called later in life, Ted) the youngest of the five Brague boys, was born in 1906. He was my dad.

At some point Mr. Nelson gave the ring to my grandfather and grandmother with the hope that they would pass it along to their youngest son on his 21st birthday. They lost contact with Mr. Nelson when the family left Wisconsin and moved to Cedar Rapids, Iowa. I do not know whether my grandfather ever wore the ring himself but in 1927, when my dad turned 21, his parents gave him the ring. He wore it for 35 years.

I was born in 1941 and received the ring from my dad on my 21st birthday in 1962. As his only child I was the oldest, youngest, and everything in between, and I wore the ring for many years also. Not only was it a family heirloom, it was my birthstone as well.

Our son married in 1991. He and his wife have two children. Elijah was born in February 1996 and Noah was born in December 1997. During 2018 as Noah's 21st birthday approached I mentioned to our son that it would soon be time to pass the ring to his younger son. Our son sheepishly admitted that he knew the ring was somewhere in the house but he had no idea where. They had lived in several houses over the years, acquired more furniture, and moved out of state a couple of times. He said he would try to find it. I was disappointed and asked my son not to say anything about a ring to Noah until he was able to find it.

He couldn't. A couple of years came and went. Noah will turn 24 in December. About three months ago our son and daughter-in-law invited us over for a meal to celebrate Mrs. RWP's birthday, and both Elijah and Noah and their steady girlfriends were present. I happened to notice that Noah was wearing a ring. I told the young folks about the history of the ring that was supposed to have been passed to him on his 21st birthday but it had been misplaced. "Really!" he said, and said he would certainly have worn it. His dad again expressed puzzlement over where it could possibly be hiding.

A couple of weeks ago we were all together again at a book-signing event for my daughter-in-law's first book, which was recently published. As we entered and were exchanging greetings with friends and family members, Noah held up his hand, palm inward. My jaw dropped open. He was wearing the ring!

My son explained that a couple of days earlier he had opened a drawer in a little-used dresser in the spare bedroom and when he moved a shirt he found a small box. It obviously contained something because it rattled when he picked it up. When he removed the lid, he saw two pair of cufflinks and the ring! He gave it to Noah the same day. It fit perfectly, and Noah had been wearing it ever since.

So now the ring has been connected to five generations of Brague men -- my grandfather (who, incidentally, was the youngest child and only son in his family, born in 1866 and turned 21 in 1887, around the time Mr. Nelson thought the ring was made), my father, me, my son, and now my grandson. Elmer, Ray (Ted), Bob, Mark, and now Noah. Bragues all. Who knows how many more there might be?

If you zoom in on the photo of Noah's hand you should be able to see the intricate carving of the knight's head and even some of the red flecks in the stone.

The ring is not worth a great deal of money, but it means the world to me.

Families come in all shapes and sizes. Some, like our friend Geri Reichstein's family, are quite small. Geri and her husband Lar... 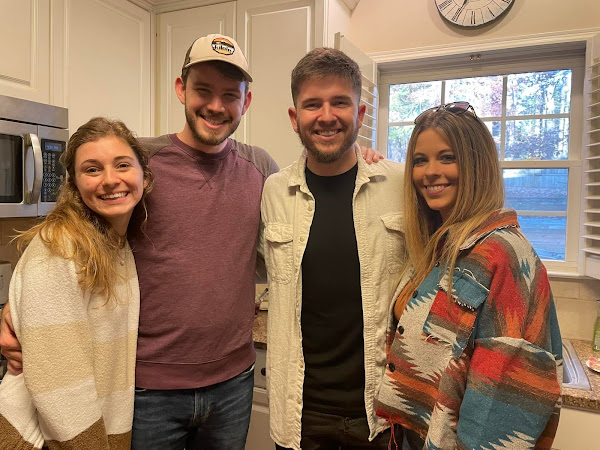