The other day, when I mentioned Prince Andrew in this post, his name was followed (inexplicaby, to Americans) by a veritable alphabet soup of letters, specifically:

These may be obvious to any stiff-upper-lipped Brit, but I shall now reveal to the rest of the world just what the heck all that stuff means.

They are his medals.

One by one, they are:
According to the Daily Mail (a staid, demure publication not unlike our own Wall Street Journal or New York Times)... 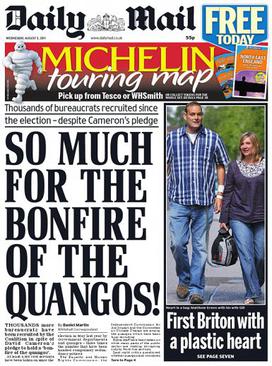 ...Prince Andrew actually has (or had, as of 2011) seven medals. The others are the South Atlantic Campaign Medal (Falklands War), the Queen’s Silver Jubilee Medal, the Queen’s Golden Jubilee Medal (given to Royal Family and trusted members of her household), and the New Zealand Commemoration Medal (1990). The Canadian Decoration mentioned in the earlier list was awarded in 2001.

You can read about them, and other fascinating stuff about the royal family, here.

Please do. There are a couple of lovely photos of the Queen when she was younger. The photos of Andrew are a bit bewildering. In one he is positively beaming, but in another he is glaring ominously at the camera. Perhaps he is thinking of his ex-wife, Sarah Ferguson, or wishing he were somewhere more pleasant, like a private island in the Caribbean.

(Editor's note: The following meme is not original with me. It appeared for the umpteenth time today on Facebook so I decided to capt...