From Natchez to Mobile, from Memphis to Saint Joe, wherever the four winds blow

Groundhog Day came and went on February 2nd, but I ignored all the folderol festivities surrounding this year’s event. Instead, I went about my business as though, in the overall scheme of things, it made absolutely no difference whether various and sundry large rodents do or do not indicate that we would have six more weeks of winter.

Because it didn’t (make any difference).

In the previous post I mentioned that Orange Beach, Alabama, is located west of Pensacola, Florida, and east of Mobile Bay, on the other side of which is the city of Mobile, Alabama. In a comment, our friend Snowbrush who lives nowadays in Eugene, Oregon, but was originally from Mississippi, said that his half-sister’s house is in Pensacola and he drove through Mobile many a time to get to her house in Pensacola but had never heard of Orange Beach.

This challenge to my veracity cannot go unanswered. The proof, as they say, is in the pudding, and for our purposes the pudding happens to be the following map of the area: 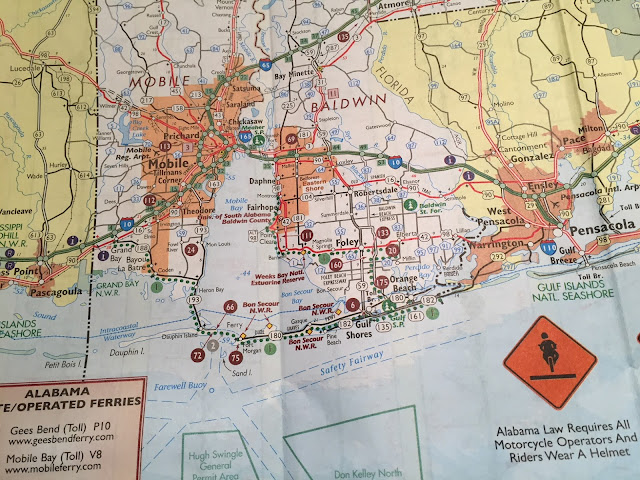 There it is, ladies and gentlemen, stretching from Pascagoula, Mississippi, on the left to just past Pensacola, Florida, on the right. You see Mobile. You see Pensacola. And if you look very closely and squint and hold your tongue just right, you will also see Orange Beach down along the coast. I rest my case. I never said you went through Orange Beach on the way from Mobile to Pensacola, either on I-10 today or on U.S. 90 back in the days before I-10 was built, when Snowbrush was visiting his half-sister.

I do find it rather bizarre, however, that a notice that Alabama Law Requires All Motorcycle Operators and Riders Wear A Helmet appears in the middle of the Gulf Of Mexico.

Posted by rhymeswithplague at 9:20 PM