A public apology, and a look at small-town America [redacted version]

[Editor’s note. In the original version of this post, I revealed too much personal data about one of our readers. After receiving multiple slaps with a wet noodle, some of them self-inflicted, I have decided to do what the Federal Bureau Of Investigation does when asked to provide sensitive material to the Senate Intelligence or Judiciary Committee, and that is to redact the document. The post below is the redacted version of today’s original post. Only persons who have passed a Top Secret Background Investigation (as I have) and who spent the entire month of February 1969 in Stockholm, Sweden on IBM's dime (as I did) and whose location in the military was just off the Staff Balcony in the Underground Command Post at Strategic Air Command Headquarters where all the General officers sat during the Cuban Missile Crisis of October 1962 (as mine was) will be permitted to see the original, unredacted version. —-RWP]

[Redacted], a reader who lives somewhere near the little town of [redacted] in [redacted], was unhappy with the title of my last post, so I want to apologize (British, apologise) publicly to her and anybody else who was offended, because if [redacted] ain't happy, ain't nobody happy. I'm just saying.

I never said any bad words, I just mentioned an acronym, and the offending acronym involved the letters W, and T, and F. [Redacted], another reader who lives in [redacted], also mentioned in his comment that the word SNAFU in the body of the post was no better.

SNAFU can be cleaned up by substituting the word 'fouled'... and WTF could have meant a number of things:

I could go on, but I hope you get my drift (as the iceberg said to the Titanic) that I am truly sorry.

I'm not really feeling sassy today, only semi-sassy, but I'm hoping it will clear up by noon.

The town of [redacted], current estimated population 634, was officially incorporated on [redacted]. [Redacted] says there have long been several versions of how [redacted] was named, none of which can be authenticated.

[Redacted] doesn't actually live in [redacted], she lives on an [redacted]-acre farm in the boonies out from [redacted], but her family is contemplating moving to be nearer their brand-new, first grandchild.

[Redacted] reminds me a lot of Mansfield, Texas, where I grew up, except I don't think Mansfield ever had an opera house. When we moved there in August 1947 the city limit sign said 'Population 774'. It is not like [redacted] any more. Mansfield has grown over the years, and the estimated population of my old home town in 2018 is 69,340. Surely it has more than two traffic lights now.

Here's a picture of the Farr-Best Theater that is still going strong as an events venue in the old one-block-long 'historic' downtown portion of Mansfield: 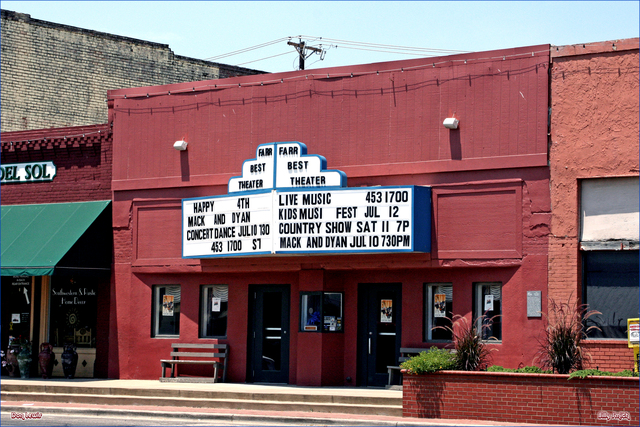 In the building with the green awning, right next-door to the theater, Mr. Farr, Mary Ann's father, also ran the Farr-Best Cafe where I downed many a hamburger, fried peach pie, and cherry coke in my yute.

Tell me a little about the town of your yute.

"the most memorable Epocha, in the History of America"

Today is July the twoth second. One of the signers of the Declaration of Independence, John Adams of Massachusetts, who later became our ...